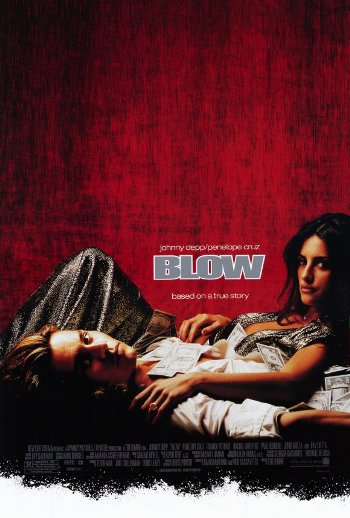 There is a long tradition in Hollywood of films that celebrate crime while claiming to speak out against it.  Blow is in its own way as glitzy an advertisement for the drug trade as Superfly was thirty years ago. The film is based on the true story of George Jung (Johnny Depp), one of the largest drug-lords of the 1970s.

The film is very good, featuring terrific acting by Depp and a reasonably hard-boiled psuedo-Scorsese storyline. Paul Reubens is fantastic as Depp’s business partner, but in the long run the exposé of the inner workings of the drug trade suffers by comparison to the more realistic Traffic. More interesting than the business side is Depp’s relationship with his hard-working father Ray Liotta and troubled mother Rachel Griffiths, as well as the parallels in his own marriage to Penelope Cruz.

The one problem with Blow… and it’s not an insignificant one… is that the film romanticizes its main character. It sees him to be a misunderstood businessman, but glosses over the fact that he is a criminal, and supposedly almost single-handedly responsible for the influx of cocaine into the United States. The end of the movie tries to show him to be a tragic figure who has lost everything, but the fact is that he squandered it all due to his own illegal actions.  (4/01)