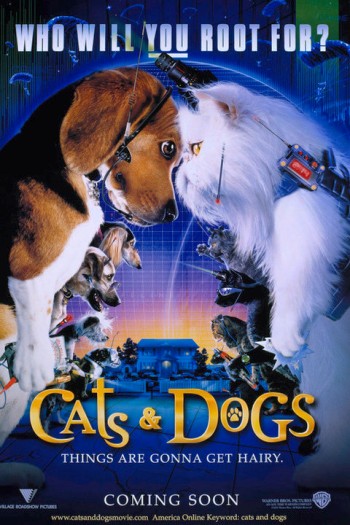 As a cat owner (okay, she owns me) as well as a dog lover, I absolutely can not buy into the politics of this movie. It is a clever movie idea in which house pets have a longstanding hi-tech battle running.

What bugs me though, is that the dogs in this movie are all selfless and good while the cats are all mean and devious. It’s sort of like if you made a movie in which there was a war that men are good and women are evil.

No one would ever put up with that, so I am going to stand up against this anti-cat faction. Cats and dogs are not right or wrong, they are just different.

Which makes it all the more of a shame, because Cats & Dogs is actually a very funny and fun film. As a family film, it is a perfectly good way to spend an afternoon. The writing is very clever and the acting… both human and animal…. is very good. The dogs are adorable and the stunts and the James Bond sets are very funny.  Sean Hayes (Will & Grace) is hysterical as the voice of Mr. Tinkles, the leader of the devious feline plan.

If not for Cats & Dogs’ basic dangerous bias, I would recommend this film highly. Too bad it’s also a piece of anti-cat propaganda that is essentially The Triumph of the Will of talking animal movies. (7/01)