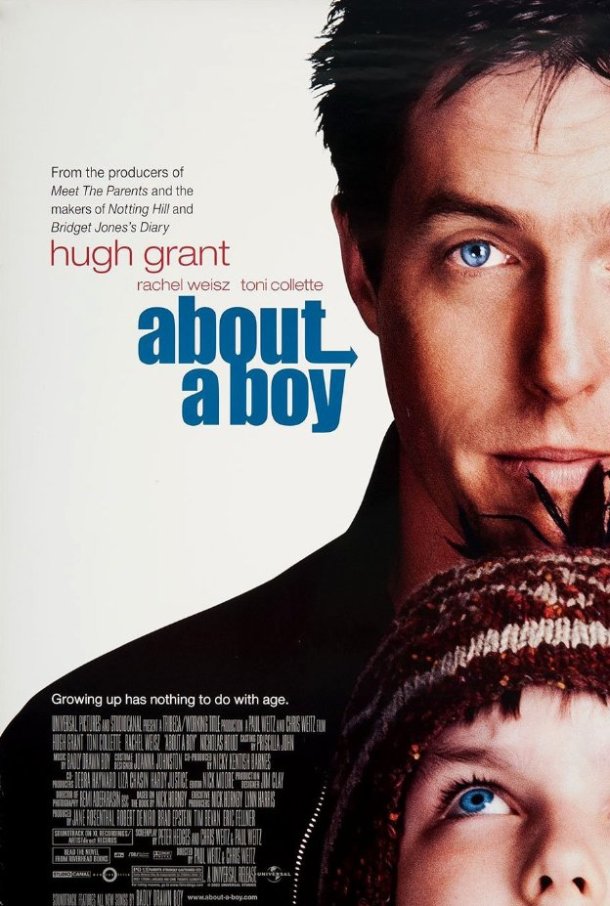 Hugh Grant has quietly, subtly become one of our best light comic actors.  Maybe because he is best known for playing similar characters – handsome and charming yet flustered and shy – in his two biggest films, Four Weddings and a Funeral and Notting Hill people have a tendency to overlook his range.

About A Boy is based on the wonderful novel of Nick Hornby, who also wrote High Fidelity, which John Cusack turned into another terrific look at modern single life.  Grant gets an another opportunity to really stretch his acting muscles in the story, and he makes the best of it.  Will Freeman is the dark side of Grant’s persona, handsome and charming, yet selfish and a rogue.  A man who has reached his forties without ever holding a job or having a serious relationship, Will is happy just to stay around, watch TV, and bed an endless stream of women before quickly bailing on them.  His economic independence is due to his father having written a stupid Christmas ditty years earlier, a song that has become so ubiquitous that Will has come to despise the very thing which allows his lifestyle.

Will stumbles upon a new scam to meet women, and soon he is going to single parent support groups to meet mothers who will be needy and yet in the long run unavailable.  The plan is working brilliantly until he meets an odd boy named Marcus through one of his dates.  Marcus is tortured, both by fellow school kids and by guilt over his manic-depressive hippie mother (Toni Collette).  Marcus suddenly starts just showing up at Will’s place, and since Will has nothing better to do he decides to make a project of helping Marcus.

Their friendship blossoms and allows Will to open up enough to meet a woman he can seriously care about rather than making tracks as soon as commitment pops its head in.  The one problem I have with the movie (and the novel, for that matter)… and it is the same thing that made High Fidelity’s ending a little anticlimactic… is that Hornby is wonderful at portraying single life, but in the end he has to toe the “family values” line, so his characters always decide they are not whole until they are married and have families.  But that is a slight quibble in an otherwise delightful film. (5/02)