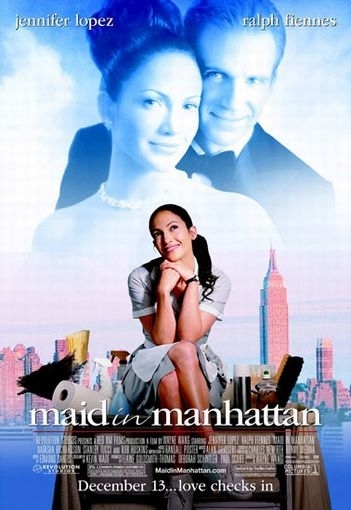 While on her mission to become the greatest multi-talented hyphenate in show business (she’s an actress-singer-model-designer-perfumier-professional talk show guest-tabloid fodder-bride!), Jennifer Lopez better not forget her day job. It’s no real surprise that she has never made a good album, but a forgiving world seems willing to overlook that fact. But her true talent, as an actress, is being lost in the shuffle. Even though she works constantly, doing two or three films annually, Lopez hasn’t made a good movie in years, and more importantly in Hollywood, she hasn’t had a box-office hit.

Maid in Manhattan isn’t going to change that track record, in fact it fits squarely in the first category. But in fairness, in its own lighter-than-air way it is amusing. The bad pun in the title should give you an idea of the level of humor in Kevin Wade’s screenplay (based on a story by John Hughes.). But, if you’re willing to shut off your mind and give into the film’s Cinderella fantasy story-line of a New York chambermaid who bedazzles a WASP politico who is under the impression she is a guest, not an employee, of the hotel.

This leads to wacky scenes where Lopez tries to balance the charm and class of snooty political fundraisers, all the while the keeping it real with the feisty housekeeping staff who are trying to live vicariously through her. It’s all staggeringly predictable, and honestly not always all that well done. Frankly, Lopez and Fiennes really don’t have too much chemistry together, though they are both just fine on their own. A game and very able cast bites into the roles like it’s Shakespeare. Maid in Manhattan is a cute enough romantic comedy, and that’s all it tries to be. But if Lopez wants to be working in ten years, she’d better start reaching higher than that. (12/02)