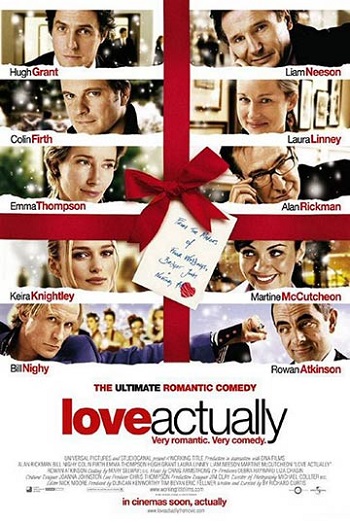 In my opinion, screenwriter Richard Curtis is responsible for two of the greatest romantic comedies ever (Four Weddings and a Funeral and Notting Hill) as well as co-writing another pretty damned good one (Bridget Jones’s Diary.) Love Actually marks the first time that Curtis has directed his own film. While it is not as good as any of those previous films, there is still much in the movie to love.

One of Curtis’ recurring motifs in his films has always been that the lead characters are surrounded by a tight-knit group of eccentric friends. In Love Actually, the film is made up of all friends and no leads. The film explores a bunch of different people who find love in London during the Christmas season. Much like the work of Robert Altman (or even more like Ron Howard’s Parenthood), the film is a complicated puzzle of about ten seemingly unconnected stories that have only one common denominator – in this case, love.

Not always romantic love, of course. While many of the stories do deal with that, others deal with the love between a parent and a child, the love of siblings, the love between old friends and co-workers, the love between countries and cultures. You have older lovers straying and new couples trying to work past second thoughts. You have unrequited love and true love rewarded. Curtis’ film covers most of the spectrum – although there are mostly all happy endings, which seems rather selective in reality, but somehow works in the context of this film.

Hugh Grant plays the Prime Minister of England who has a crush on his assistant. Liam Neeson plays a widower who is trying to survive his own grief and his step-son’s first big crush. Colin Firth is an author who finds his fiancée having an affair with his brother and goes to France to be alone, only to fall in love with his Portuguese maid, who doesn’t speak the same language as him. Laura Linney is an office worker who has fallen for a colleague but can’t bring herself to open up to him because she feels responsible for caring for her mentally disturbed brother. Emma Thompson is a long-married housewife who realizes her husband (Alan Rickman) is considering having an affair with his secretary. Keira Knightley plays a newlywed that has just found out that her husband’s best man has been in love with her and is intrigued by the idea. Bill Nighy plays an aging rock star who releases a sappy Christmas single looking to resurrect his career, only to figure out that he already had what he needed in life.

The stories sometimes seem a little disjointed, particularly early on in the film when we are still trying to figure out how (or if) all these characters are related. In the end, all are intertwined in surprising ways, though not necessarily in huge ways. Instead, the film becomes the story of a community, as well as the individuals.

The large group of tales tends to cause some anecdotes to be under explored. One of the funniest early sections explores the amusingly chaste courtship between two nude figure models. However, the characters disappear for long periods of the movie and when they finally do reappear, it with a whimper rather than a bang. Also undercooked is the story of a goofy waiter who decides he is going to move to the United States to find beautiful women, only to have his dreams come startlingly true.

Curtis’ directing is mostly very assured, although he might have used someone else there to help curb some of his more sentimental impulses. The acting, as would be expected with a cast of this magnitude, is pretty stunning.

Love Actually is in the end a valentine to the human race. Even the most cynical audiences (myself included in that list) can’t help but wish that true love conquered all – for real – as tidily as it does in Richard Curtis’ world. Some of the stories are a little slight, some are a little sappy, some are ended a little ambiguously, but all in all there is something for everyone here. You’d have to be a real Grinch to not fall under Love Actually‘s spell. (11/03)