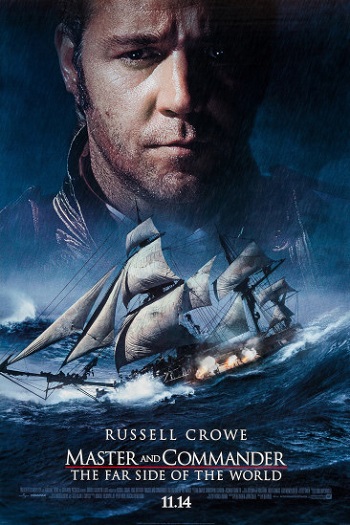 Master and Commander: The Far Side of the World

MASTER AND COMMANDER: THE FAR SIDE OF THE WORLD (2003)

I normally don’t go for movies like Master and Commander: The Far Side of the World. Not that I don’t recognize the craft, but big old-fashioned grand spectacles sometimes tend to bore me. I only go so far appreciating bold David Lean inspired vistas and strong men fighting the ravages of heartless Mother Nature.

Even though Russell Crowe has become a bit of a master of the art form, I have always appreciated his more nuanced performances in the likes of The Insider, A Beautiful Mind and even LA Confidential to the testosterone-driven likes of Gladiator.

So, I am pleasantly surprised how rousingly enjoyable Master and Commander turns out to be. It has a wonderfully simple premise. A British ship, HMS Surprise, is ambushed on the high seas by a bigger, faster French privateer ship. The commander and crew set about repairing the ship and then enter in a cat and mouse game, following the attacking ship across the ocean for a final showdown between good and evil.

So far, so okay. What really makes the film soar, though, is the meticulously detailed view of what it was like to live on a ship in the early 19th century. The boredom, the crowded conditions, the camaraderie, the sudden bursts of panic, the bad food, the honor, the primitive conditions; all are explored with an unblinking and totally all-seeing eye.

Of course, in a movie this grand and with so many characters, it can sometimes be hard to keep track of everyone. Many of the ship’s inhabitants tend to blend together. For example, at one point when the ship is forced to leave behind a sailor who has been washed overboard in a raging storm, it is a little harder to feel the crew’s anguish because it is almost impossible to tell who it was who died. Even now, I only think I know who it was, and I have to admit I thought it was two other characters before that who ended up popping up later.

The two characters who resonate the most are of course the main characters. Capt. Jack Aubrey is a legendary ship commander (his nickname is “Lucky Jack”) who must lead the ragtag crew across the dangerous waters. Acting as Capt. Aubrey’s conscience is his best friend, the ship’s doctor Stephen Maturin (Paul Bettany, who also played Crowe’s “friend” in A Beautiful Mind.) Maturin is unique because he is the only person on the ship who is not awed by the legendary leader. Captain Aubrey respects the fact that the doctor will be straight with him, even when he doesn’t like to hear what he has to say. (In fact, at some points the Captain and the doctor sound a bit like a squabbling married couple, and I don’t mean that in a homo-erotic way.)

Other characters who do make a mark are a very young seaman (this film shows powerfully how boys of thirteen worked alongside old salts) who loses his arm tragically on his first days on the sea but becomes an indispensable ally. There is also an overwhelmed officer who is driven to destruction by a disrespectful crew.

It all leads to a climactic battle in which Lucky Jack must match wits with the French commander. If you like your adventures grand, with manly men braving the elements and fighting for God and country, Master & Commander is the film for you. Surprisingly, you’ll probably like it even if you don’t go for that.

I have not read any of Patrick O’Brian’s books, from which this film springs. And while I had never had any interest in them previously, this film tempts me to pick up the novels, which I guess is as good a recommendation as you can get. (11/03)