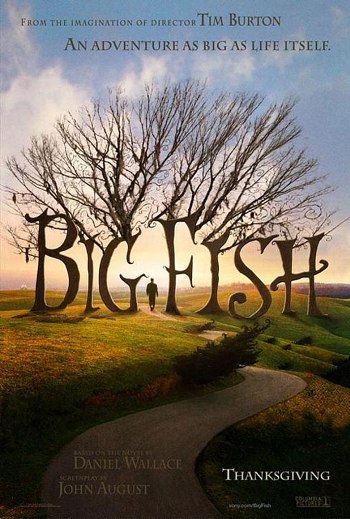 I had a rather complicated reaction to Tim Burton’s latest film Big Fish.

The world that they built was fantastic, interesting, imaginative and dazzling.  It was populated with quirky, larger-than-life types living existences of great adventure.  Great thought and fancy was put into the script and the sets were charmingly eccentric.

Yet I have to admit, as much as I respected what Burton and the filmmakers were trying to pull off and I respected their bravery in trying, I really didn’t buy into it for a second.  I enjoyed the acting, respected the whimsical quality and yet I felt it did not connect on any real or emotional level.

The film, at its most basic, is supposed to be a reconciliation between a dying father (Albert Finney) and his estranged son (Billy Crudup).  The son gets to learn about the real man he has never really known by finally listening to dad’s tall tales of his life.  (Ewan McGregor plays the character in these flashback scenes.)

The rest of the movie is basically set in the real world, but these stories full of witches, ogres, potions and really big fish seem like some strange mythology.

Crudup is supposed to stand in for the audience, I think, as he doesn’t really believe all the stories dad spins.  (And what sane person would?  They scream out of fantasy.)

However, we are not really given enough evidence of why the son is so angry at his father, who is shown to be a blow-hard and overpowering, but generally seems to be a basically good man.

In fact, the film shares the same shortcoming as the main character.  It’s charming, intriguing and can spin a whopper of a tale — but in the long run it’s full of hot air.  (1/04)