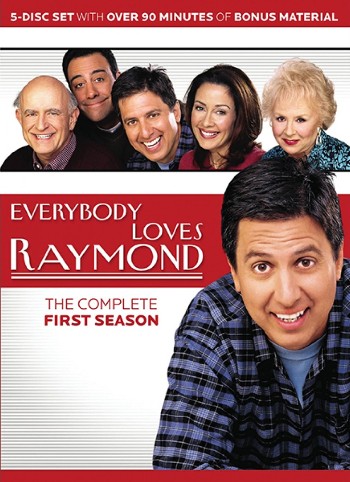 The terrific Everybody Loves Raymond is the situation comedy structure stripped down to its barest elements. Because the sitcom genre peaked with Seinfeld and had nowhere else to go, the Raymond creators instead traveled back to the ‘50s, to the very inception of this odd but immortal art form, and hit the refresh button.

Its plotlines seem to be reincarnated from those involving Lucy or the Kramdens, the family dynamic is as traditional as a pancake breakfast, and it lacks even the slightest hint of sex appeal. What gives the series its “Do Not Recycle” label is its right-on-time, insightful writing, fused with great ease into natural-feeling characters, all of them smart when they’re expected to be dumb. It’s impressive that a sitcom with a premise this sitcomy (mucho married sad sack with overbearing parents living right across the street!) is actually compelling and watchable when it should be an eye-rolling snore fest.

“Based on the comedy of Ray Romano,” is the warning we get in the closing credits. This was the course of action for most successful stand-up-cum-sitcom-superstars of the ‘90s (Roseanne, Tim Allen, Ellen DeGeneres, Paul Reiser, and, of course, Jerry Seinfeld). Romano was a nobody only minutes before his sitcom deal. He worked as a Queens UPS driver who toiled in the Manhattan comedy clubs at night while supporting a wife and three children (including twin baby boys, which was the focus of much of his comedy).

His funny take on married life caught the eye of David Letterman and his TV production company, Worldwide Pants. As a favor to Letterman, CBS executives took a chance on a Romano pilot even though the comedian had never acted before (except for a stint on News Radio, as a janitor who was written out after one try). With the help of the talented TV writer (and series co-creator) Phil Rosenthal, Raymond was placed in the dead zone of Friday evenings (opposite the ABC powerhouse TGIF lineup). Despite how funny it was from the very start, it needed immediate life support. CBS was savvy enough to know it had a good thing going and moved it to Monday (a good night for comedy on that network since 1951, when I Love Lucy debuted), There, Raymond found its audience and rightfully thrived ever since.

Originally titled (among other ideas) Related To Raymond, this is a breeder comedy without the breeder comedy. As Romano thankfully explains in the Letterman-esque opening credits (in which the family goes by on a conveyor belt as Romano describes the simple plot), “it’s not really about the kids.”

That Romano reassures us that this will not be another precious family comedy is comforting: stay tuned, really, he’s winking to us. You will be pleasantly surprised if only for the fact that you will not be subjected to yet another precious sitcom brood and their one liners. The kids are there, for sure (even though they are as cute as buttons, they look absolutely nothing like the rest of the family); the realistic set is literally loaded to the ceiling with toys, but like most sitcoms that consider young offspring a necessary evil, a good part of the time they are told “now scoot” or “get ready for bed” or they are being hustled off-stage to “play,” thank goodness.

Still, it’s all about family, all the time. The story is so strangely ordinary that it is extraordinarily strange: brooding, moping mama’s boy marries feisty gal, spawns three adorable children, and moves into a cozy Long Island house across the street from his childhood home. His parents enter without knocking, and proceed to drive the daughter-in-law to the brink of madness. The comedy lies in the fact that she has the patience of a saint… so far (tune in next week to see if she finally breaks).

To deepen the comic potential, Ray’s stone-faced giant of a brother is a cop, divorced and living with his ball-busting parents. He’s big and scary, but ultimately melancholy and mildly jealous of his brother (“Look at Raymond go,” he mumbles under his breath when the family learns that Raymond is going to have twin boys). And his domineering mother reassures him, “You don’t have to be sensitive. You’re big.” Brad Garrett created and broke the mold for this character. He was the first one cast, even though the role called for a lightweight nebbish. Better than the original idea, Garrett knows how to make entrances and exits like nobody else on TV.

The Barones are about as Italian as a can of Chef Boyardee spaghetti, but they bicker and snap and seethe and meddle, all the healthy ingredients of a steady diet of too much togetherness and human suffering. In fact, the series’ name itself is misleading – it’s not meant to be a sunny, sitcomy title; it’s origins are sarcastic and dark, stated jealously by Ray’s TV brother, who is envious of the seemingly good life Ray seems to lead, but doesn’t.

They tried to introduce the reliable sitcom staple of “friends and neighbors” at the series’ start (in fact, Maggie Wheeler, best known as Janice “Oh! My! God!” Litman on Friends, was a two-episode friend and neighbor here before disappearing, popping up later in the series once in a blue moon. Curiously, Wheeler was a short-lived friend on Ellen and Suddenly Susan as well.). Also, Kevin James makes a few appearances as an obnoxious friend before he tones it down and becomes The King of Queens.

However, the interaction among the immediate family members works best, and outsiders no longer need apply. Romano is a surprisingly good actor for someone without a Hollywood resume. He whines, moans and complains in a style so naturally entertaining that you never feel tortured.

Patricia Heaton excels as Debra, his put-upon, stay-at-home wife. As The Outsider and the target of her mother-in-law’s passive-aggressive attacks, Heaton pulls it off as more than just The Exasperated Wife; she delivers the depth and range that the role requires; she’s the anchor. It’s not as easy as it looks to play it “normal.” When she decides that, compared to Ray’s whack pack, she’s not interesting and has no flair, Ray assures her that she is far from boring. He asks of her, “What weirdo would choose to be one of us?”

Ray’s parents, Marie and Frank (played by veteran TV mom Doris Roberts and the amazingly versatile Peter Boyle), never disappoint. Their characters are boorish and cartoonish, but we’ve actually seen these people – we’re related to them, we live near them and we’ve overheard them in the supermarket. Marie torments Frank with, “We haven’t had a conversation in thirty-five years,” to which Frank responds with “I didn’t want to interrupt.”

The weak links are too few to warrant complaint, but they are there. The realism of the story is soured by the fact that Ray has a glamour job: a newspaper sportswriter. Even though the creators have the good sense to report that he makes only $50,000 a year, we never really see him earning that dough. He travels here and there, and it gives the show an excuse to use Tommy Lasorda in a cameo, but that is not helpful enough to move most plots. Most of the time he casually watches sports on TV from his living room couch like every other guy in America. If he were a real newspaperman, he would be laboring for hours on what he is watching. The show’s believability factor would have been much higher if he was, for instance, a UPS driver.

Also, the wife’s parents are rich snobs from Connecticut (stunt casting provided by Robert Culp and Katherine Helmond). Granted, the idea of rich snobs from Connecticut is not a crime in itself, but what is criminal is that TV writers tend to assume that Connecticut is always code for “rich” and that the only rich people who live in New Jersey are the Sopranos. Their appearance is usually witless and wasteful and only semi-occasional, to serve as foils for the workaday Barones. However, as Marie pleads with Ray, “Couldn’t you tell Debra, once and for all, that’s enough with her parents?” We agree.

The DVD includes some upbeat commentary tracks from Romano and Rosenthal, three behind-the-scenes documentaries worth watching, and an early Letterman appearance that served as the basis for the series. Everybody seems to get their stories straight. And everybody does love Raymond for real. It’s just not about saying it out loud. When Ray is told by his wife that he has a problem saying “I love you,” Ray’s father tells it like it is: “This is real life, Raymond. People just don’t go around saying that.”