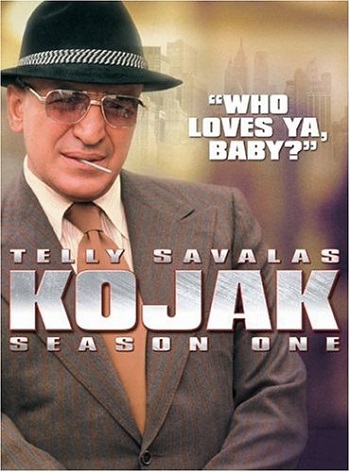 With Ving Rhames taking over the role of Kojak on USA Network’s newly configured version of the original cop series, there’s been newfound interest generated in the pioneering seventies drama and the actor who made bald cool and classy. Back during the polyester decade, the term “Who Loves Ya, Baby?” – one of Kojak‘s trademark expressions – took its rightful place alongside other beloved cultural perennials as Charlie’s Angels, pop rocks, air hockey and The Partridge Family. Acclaimed Emmy and Golden Globe winning actor Telly Savalas (who had previously been best known for his role – with hair! – as Pontius Pilate in the biblical epic The Greatest Story Ever Told) inhabited the role of a lifetime as Lieutenant Theo Kojak, a wise cracking, thrill-seeking detective manning the mean streets of the Big Apple.

A new 3-DVD set, Kojak – Season One (Universal) assembles all 22 episodes from the show’s first season. It unravels the compelling story of this wily detective’s valiant attempt to fight crime in the mean, mean streets of New York during the era that the city was at its most out of control. Handling himself with smooth, steely aplomb, signature lollipop permanently pursed between his lips, (apparently Savalas took on the lollipop as an affectation because he didn’t want to be seen as promoting smoking) Lieutenant Theo Kojak has his work cut out for him. Prowling the city limits, Kojak has constant run-ins with NYC’s most notorious bad asses including drug addicts, jewel thieves, pimps, murderers, street urchins, kidnappers, hookers, low life vigilantes and sundry street scum. A hardened detective with a heart of gold, Kojak is a master investigator, ensuring no homicide is left unsolved.

The stories found on Season One are captivating and handsomely constructed; packing enough excitement, thrills and pathos to keep you on the end of your seat. Watching these episodes now, you can’t help but have a few minor quibbles. Sometimes the tough street vernacular is a bit dated (though, amazingly for a show from the heart of the seventies, the fashions aren’t all that outmoded.) The plot lines are often a tad predictable. For example, the pilot episode had Kojak in the middle of a big police stand-off with a group of gun-toting bank robbers (including a very young Harvey Keitel) holding a group of innocent (and ethnically diverse – this is the seventies) hostages. The bad guys insist on a plane to fly them out of the country or else they will start to kill. The story is obviously based on the real-life incident that also inspired the classic Al Pacino film Dog Day Afternoon; though in all fairness to the makers of Kojak, they did beat that film to the punch in telling the story by almost two years. Besides, as the Law & Order franchise keeps proving today, you can do a lot worse than scouring the newspapers to come up with interesting story ideas.

However, even if some of the stories were a little familiar, all 22 episodes on hand stand up as a result of Savalas’ impeccable acting chops. Unpretentious and unpredictable, Kojak means business, whether viciously jacking up a criminal against a wall or mowing down his prey by blazing a trail of fiery gun shots. Adding to the fun, there’s a whole bunch of famous faces you’ll recognize in this first season including acting icons Harvey Keitel, James Woods, Hector Elizondo and Jackie Cooper, song-and-dance legend Scatman Crothers, and past and future television stars like John Ritter (Three’s Company), Paul Michael Glaser (Starsky & Hutch), Isabel Sanford (The Jeffersons), Ann Jillian (It’s A Living) and Yvonne Craig (Batgirl on the campy sixties series Batman).

Directed by Sean Penn’s father, Leo, the episode, “Die Before They Wake” includes not one, not two, but three sitcom stars; the luscious Tina Louise, Ginger from Gilligan’s Island, who portrays a whore with a drug problem, minor parts are handled by Ann Jillian and Isabel Sanford. John Ritter is particularly outstanding in the episode “Deliver Us Some Evil,” going way against his later type by playing a bad guy. It’s fun to see Ritter acting convincingly as a slimy thief who is on the run after committing a vicious murder. In “Web of Death,” a nicely jaded Hector Elizondo plays a good cop who goes bad – really bad – when his wife (played by ubiquitous 70s TV sexpot Barbara Rhoades) has an extramarital affair.

Championed by People Magazine as “a TV classic, slick, well-plotted and entertaining,” the first season of Kojak turns out to all that and more. “Who Loves Ya, Baby?” We do, Telly, we do.