It’s never easy to make your own way when your father is a legend in your chosen pursuit. Just ask Julian Lennon, Jakob Dylan and so many others, even if you sound nothing like them, the comparisons will still come.

Adam Cohen is in an even weirder position than most. His father is the legendary novelist-turned-song-poet Leonard Cohen, who is revered by critics, but has always been more of a cult artist than a popular one. So, the sales assessments may not be overwhelming, but artistically he must be at the top of his game to rate.

After Cohen’s 1998 self-titled debut album disappeared quickly, Cohen decided to split his career in two distinct directions. He released a French-language album called Melancolista in 2004. Cohen has also formed a band called Low Millions with some long-time friends – guitarist Michael Chaves, bassist Jorgen Carlsson and drummer Eric Eldenus. The band has released their debut album Ex-Girlfriends. The debut single “Eleanor” received a good amount of airplay. As the second single, “Statue” was about to be released, Cohen sat down with us to talk about his life, his career, and, yes, his dad.

Your father is a rather legendary figure in music. Did he help to inspire you to take up music as a calling?

I think I have some kind of genetic encoding and I think I was the beneficiary of a very creative environment when I was growing up. I certainly had his encouragement. So, if you combine all those three factors, the answer is a definitive yes. I had lots of help from my father.

Do you ever feel intimidated by the inevitable comparisons that come?

You released your first solo album in 1998, and it was released to critical acclaim, but didn’t really find its audience.

(laughs) That’s a very polite way of putting it.

How disappointed were you that it didn’t really catch on?

It makes no real difference to me at this stage of the game. Whether or not it had been successful would likely not have affected what I’ve done now. I was lucky enough to find like-minded, talented musicians to form a band with me. That’s a luxury at any stage of your life.

I had heard that you also have done some songwriting for Bette Midler, k.d. lang and Mandy Moore. What did they record of yours?

You know, Bette Midler is the only one that actually recorded it. That was written (in an old article) and it’s one of those things where someone wrote that and put it out of context, and since then people have been quoting that particular phrase. I’ve actually written for many, many more people who are far more well-known. Some songs have been recorded. Some songs haven’t. Many songs I think were demoed. And then some songs were completely ignored. (laughs) It’s really of no importance unless they’ve recorded it, so I’d rather not talk about it.

Sure, well who were some of the ones that did get recorded?

Bette Midler was definitely one of them. (The song that she recorded was called “Lullaby in Blue” on her 1998 Bathhouse Betty album.) Then there are a couple of French artists, one in Quebec and one in France. There is a calypso artist in Guadalupe. None of whom anybody would know, so it’s not really worth talking about. Bette Midler is the only international star who has recorded anything of mine.

I heard that you grew up in France? Where was that?

I grew up in Paris and the south of France.

Last year you released an album almost completely in French. What was it like to be singing in your second language? I know you lived there, so you must know the language well.

Sure, plus I’m French Canadian. I’ve always been bilingual. I spent a total of twelve years in France. Making a record in French was like a culmination of wishes and work and time invested in the language. It was a way of categorizing two projects. One was going to be assigned… Adam Cohen was now going to be a dedicated French recording artist. Adam Cohen was also then going to be the lead singer in a band called Low Millions in English. There was a natural division that was created by virtue of the other project. It’s also a way of dispensing a certain category of song to one project versus the other. The more cinematic, luscious, sexy work goes to the French stuff automatically, just because it fits it better. The more immediate, commercial, explosive and dynamic material gets assigned to Low Millions.

I did notice that “Hey Jane” was also on the French album as well as the Low Millions album. Was that the same recording, or did you do it differently?

I actually… I’d written that in French first and wanted to just make some kind of pipeline between the two.

How did Low Millions come about?

I’ve known them for years. We’ve been making music with each other on and off. We’d met in rehearsal halls and venues and through mutual friends. At recording studios. All in Los Angeles. They’ve been part of my recording, rehearsing and gigging outfit for years in various combinations. 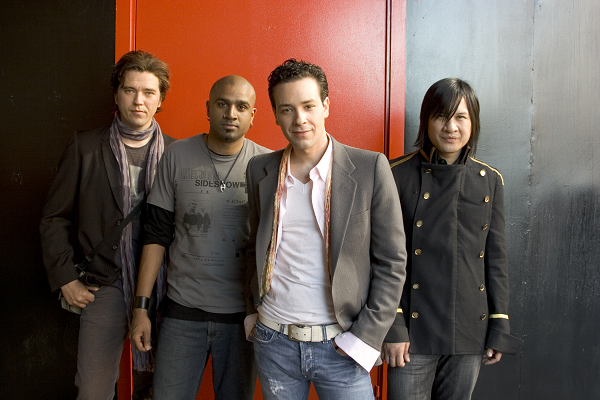 Your album is titled Ex-Girlfriends and there are song titles that refer to specific women’s names, like Eleanor, Julia, Jane and Nikki. Are those based on real exes? Did you ever hear what they think about the songs?

Absolutely, yeah. Part of the treat and intrigue of this record was that we got to speak about our own real relationships with people. We got to invite our real ex-girlfriends down to a photo shoot. Then they got to… most notably “Eleanor,” when that song was doing quite well at radio and on video, we got to see her reaction. Now we’re going to see Jane’s reaction, because “Statue” is the second single. Every night when we play “Nikki (Don’t Stop),” we get reactions from people. I have yet to play the song for her live on stage, but it’s definitely one of the perks. You get to translate something you’ve lived into something that capture’s people’s imagination.

It seems like in a lot of the songs, when the lyrics turn to relationships, the relationships are either dead or dying. Do you find troubled relationships more interesting than happy ones?

You worked with some interesting names from the 80s and 90s on the album. You wrote with Tonio K and Davitt Sigerson (Tori Amos) and had production done by Patrick Leonard (Madonna) and David Kahne (The Bangles). How did they get involved?

They all, like… the production itself, David Kahne and Patrick Leonard and Keith Forsey, all of these producers are essentially the equivalent of clothing designers. The song is a mannequin or a model. You have to tailor the outfit to the shape of the model. Some songs require a tighter fit. Some songs a more casual look. That’s why these people were called, for their expertise in the appropriate treatment of the model, being the song. As for my collaboration with Davitt and Tonio, well these are friends of mine. These are people who I’ve known for years and who I’ve learned from and who I’ve collaborated with. And will continue to, if I can help it.

One of the good things about your music is that you appreciate the importance of a tune. So many rock bands seem to think it’s a sell-out to be catchy anymore. Do you think pop songcraft is making a comeback?

I don’t think it’s ever disappeared. I really don’t believe… I am one of the staunch believers that Nirvana was as pop as you can get. I don’t believe that there’s ever been an absence of a certain immediacy on the construction of a melody of a pop song. What makes a pop song is typically that word “pop” … which is popular. What makes something popular is its accessibility, its immediacy. And its hookiness. Whatever form that takes is kind of immaterial. All of that is just aesthetic. But essentially pop music is something that has hooks. I love hooks, unabashedly.

I remember when I was in college, one of my writing professors said that if you feel inspiration, you should lie down and wait for it to go away. I always thought that was a bad attitude. What are your feelings on inspiration, does it drive your songwriting?

That’s crazy to me.

He was one of those writing as a nine-to-five job types who said you did your sloppiest work when inspired.

He sounds like he was a punk. That doesn’t make any sense to me, and it’s not something that I would follow (laughs) or put much stock in. Inspiration is rare and scarce and should be treasured. If you can harness it or manufacture it, you’re a genius.

Who were some of the musicians who inspired you to take up music?

I’ve always loved U2. I’ve always loved Prince. I think those are kind of like two poles – to extreme left and extreme right – that have informed my writing and my comprehension and my love of music. If you want to call that East and West, and on the North, you have companions to my father’s work in their lyrical content. That would be Dylan and Joni (Mitchell) and Randy Newman. On the South Pole, you have classical music, which is just purely compositional, my favorites being Chopin and Bach.

I wrote a book on Tom Waits, so I just ask a lot the people I interview if you’re familiar with him and what you think of his work?

Sure, well, I love it. I’m inspired by it. In awe of it. It’s so insular in its genius that I often forget it, because I’m incapable of mimicking it or incorporating it into my world. It’s so unique.

Did your father hear Ex-Girlfriends as you were recording it or when it was done? What did he say?

I really prefer presenting my father with finished work, when it comes to recording. On the other hand, as I was actually writing it, before I committed it to sound, to tape if you will, I consulted him all the time. When I was proud, I would show him a lyric. When I was confused or insecure about something, I would consult him. So, he’s very much aware of the record.

In the long run, how would you like for people to see your music?

Ideally, you want to occupy the highest ranks and contribute back to music the way it contributed to you.