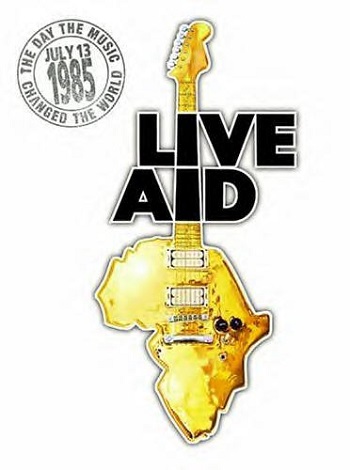 It’s been said that the road to hell is paved with good intentions. There is no better example of this than the agonizingly sixteen-hour-long Live Aid broadcast on July 13, 1985 (now available on DVD).

The official excuse for the concert was to raise money to feed the starving people of Ethiopia, but the let’s-get-real reason was to witness Western civilization’s most celebrated rock and pop stars perform because they care. They care deeply.

The event, held simultaneously in two stadiums on two continents, was a strange hit parade – musical acts whose careers literally faded as the sun set that evening.

Here’s how the magic happened: opportunist Bob Geldof (of the begging-to-be-beloved Boomtown Rats) was emotionally moved by a BBC documentary exposing the heart-wrenching horror and tearful tragedy of the victims of the African famine. The sorrowful images of suffering children and mournful, helpless pawns of a wicked political game immediately brought to mind haircut bands.

Geldof then mobilizes the English pop stars with the highest hair to record a novelty song called “Do They Know It’s Christmas” (in which the lyrics “feed the world” sound like “feed the squirrels”). The British concern for unfed squirrels rocket sales of the single into the millions, and yet somehow the proceeds are directed not toward the furry critters but toward funding relief efforts for the Ethiopian famine victims.

Not to be outdone, America’s oldest child, Michael Jackson, and former-Leslie-Gore-producer Quincy Jones form a band called USA For Africa. Together, and with the help of some show-biz friends, they churn out a best-selling anthem called, with great arrogance and presumption, “We Are the World.”

In its famous recording session, a sign is posted at the entrance to the studio warning all contributors to “Check Your Egos at The Door” (this means YOU, Kenny Loggins!).

Both records, on both sides of the pond, are accompanied by music videos depicting the planet’s most beloved singing stars (and Dan Aykroyd) getting along in the name of charity. As well, these cats and kittens are rocking out (in priority order) without their cumbersome egos getting in the way of the urgent message.

You have your Bruce Springsteens duetting with your Stevie Wonders, and your Huey Lewises patiently waiting for your Cyndi Laupers to finish their well…well…well…wells, and your Bob Dylans awkwardly attempting to be team players. When Lionel Richie at last gave the “thumbs up” sign, the world knew that USA for Africa – as well as the world – was going to be all right.

Despite its success, USA For Africa broke up almost immediately after the release of their first single, never to be heard from again.

However, to make sure that the check for the meal was covered (including tip), Geldof organized the Live Aid concert, to be held at both Wembley Stadium in London (highbrow) and JFK Stadium in Philadelphia (lowbrow).

The extravaganza, beamed by satellite and recorded with clunky, land-lubbin’ twentieth-century cameras, was most likely the tenth-best day of Bob Geldof’s life, and the most exposure The Boomtown Rats would ever hope to receive before or since.

On this date, unofficially entitled “The Day the Music Changed the World,” each stadium is filled to capacity with the kids, tattoo-less and grunge-free and well-scrubbed. Girls, desperately trying to be adorable, sit on their boyfriends’ shoulders and wave their arms. To fend off the July sun and discourage horniness, the crowds are hydrated with giant fire hoses (even though the British don’t sweat). The appearance by the Prince and Princess of Wales (Chuck and Di to you, thank you very much) officially signal to the world that the Africans really must be starving – this isn’t just jive talkin’.

The festivities are initiated by Style Council and Status Quo (that’s right: “who?”), and then Adam Ant, doing his trademarked high kicks in tight leather as if he made a wrong turn off Christopher Street. Spandau Ballet sings “True” while their moussed hair bakes in the sun, and Sting sings a duet, first with his ego and then with Phil Collins.

Collins makes musical and jet-flight record books by being the only performer in history to play London and then Philadelphia within four hours, and to be the only performer in history to even think of heading to Philly after London. If this isn’t proof enough that the 80s were an age of wonder, witness the Band Aid finale, in which Adam Ant gets more microphone time than Elton John.

Meanwhile, the American crowds are delighted by semi-host Jack Nicholson, who shows his cool detachment by chewing gum and wearing sunglasses. There’s a jeff cap for the Beach Boys’ Al Jardine and a headband for Mark Knopfler. The entire stadium heads to the restroom during REO Speedwagon’s set. And who invited Chevy Chase?

There are cringe-inducing moments aplenty. Most unbearable of these is when Joan Baez announces, “THIS IS YOUR WOODSTOCK.” Madonna sings history’s Top Two All-Time Worst songs (“Holiday” and “Into the Groove”). And what cringe-inducing moment would be complete without yet another tiresome rendition of John Lennon’s unhackable “Imagine,” this time over sung by Patti Labelle. To take cringe inducement into the homestretch, feel your toes curl when you witness the entire crowd sing along with every word to Queen’s “Radio Ga Ga,” complete with the 80s Arm Wave.

The concert’s high points are arguable. Some say the highlight is that Huey Lewis and the News were not invited. Others insist that it’s the appearance of U2, in the intense mullet phase of their fledgling career. Bono wears boots that are made for walkin’, and he symbolically brings his own Courteney Cox out of the crowd and dances with her (where is that girl today, besides seventy pounds heavier?). He also sings “Ruby Tuesday,” most likely in honor of the restaurant chain (food, get it?).

Of course, the most memorable moment of Live Aid is when Mick Jagger asks, “Where’s Tina?” and he ain’t talking about Tina Louise. He and Tina Turner do a proto-type wardrobe-malfunction jig as Jagger not only rips off black culture in general but rips off Tina’s leather mini skirt.

Nicholson introduces “the transcendent Bob Dylan,” and the inevitable finale involves a mega-version of “We Are the World,” which includes a formerly uninvited Cher.

It’s fifteen minutes of fame stretched over four disks and ten hours. A lot is missing, due to legal hassles and destroyed tapes (this explains Rick Springfield’s absent performance – or does it?).

Warning: 80s Overload can kill. Small doses are prescribed. However, sales of this DVD continue to fund the fight against world hunger, so: