With two remarkable cinematic performances under her belt, teen actress Evan Rachel Wood has successfully avoided doing the clichéd Hollywood chick flick routine. InThirteen the Southern born Wood gave us a thoroughly authentic look at the travails of a modern suburban teen but through Pretty Persuasion she gets really tested having to create Kimberly Joyce, a no holds barred adolescent monster with a sweet side.

So this part was originally going to go to Jenna Malone and you were going to play the beautiful best friend who steals her boyfriend.  Did you get to work with her?

I only met with her once and I think Jenna’s great; I really, really respect her and think she would’ve been great but it all happened so fast, getting [this other part] and having to completely switch my mindset about the movie. I went, “Oh my God, I have to go back and read it. What am I doing now? Oh God, that’s what I’m doing? Did I agree to this?” So it was a little scary at first, but I was excited because it was kind of the most challenging role I feel that I’ve taken on.  So I was scared but excited.

Even more than with doing Thirteen?

Yeah, because with Thirteen, I felt like I could relate more to the character. And with this one, there’s comedy involved and I had never done that and you try to, since there’s been so many similar characters like this, to make her different, not just a kind of easy, one dimensional, mean girl. 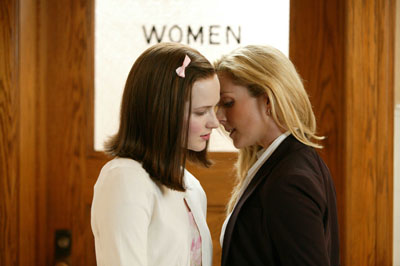 There must be a better choice of words.

Yeah [laughs]. So I wanted to give her different colors and try to figure out where she was coming from and not to make her so mean and have moments where you do feel bad for her.

You once said “People think I play these damaged girls.” Even on an episode of CSI you played the damaged girl – you were 12 or 13.

What is it you do that makes people want to see you in these dark roles?

Well, I specialized in drama, so anything I do will be dark and dramatic. But all of the characters I’ve played seem pretty different than me and coming from different places and just as long as I’m not doing the same thing over and over again [that’s cool]. I do feel like I worked some sweet roles in there too. I was a pretty sweet character in Once and Again. I’m doing a musical now.

It is light! It’s Beatles songs.

How difficult was it in preparing for this role, in taking on this character?

It was hard because this character has so much dialogue. The first ten minutes of the movie is just me ranting and talking and just having to memorize all the lines and, like I said, not to have her be the stereotypical bad teenage high school girl. I was just trying to figure out a way to make her be so empty inside and yet just have so much going on in her brain. Everything is just up here and there’s nothing going on in here and just pure venom coming out of her eyes and yet she still looks very sweet and she’s got a smile on her face. Having to mix all those things together was fun to play around with.

In terms of the way the character was developed Pretty Persuasion offered quite a contrast to Thirteen – your character there was all
about emotion.

Oh yeah. Her emotions were all over the place and she was not about to hide any of them.  So yeah, that was just like go all out, just put her all out there.  But this girl was very internal and you just had to see everything going on in her face and in her eyes.

To approach this role, you had to think she wants to be this celebrity no matter what?

There’s so many reasons why she does what she does.  It’s established in the movie that she’s way too smart for her own good and she’s broken all the school test records so you know she’s already a really smart and clever girl. And just seeing how she was raised and what kind of a house she came from, she just felt really alone and really unloved and already like she didn’t have anybody. Then her brother dies. You kind of get the impression that they were close. And then she feels like her best friend betrayed her.  So yeah, she’s just pissed off and feels alone and she feels like there’s nothing left to lose. So why not just do whatever she can to become famous and get what she wants for herself.

Actors always often say that you have to get things across in the eyes, or more in the movements of the face. What do you do to make your eyes convey emotion?

It just happens. When you just think about the way you’re saying it. The eyes are kind of unexplainable. It’s weird how you can stare into somebody’s eyes and know what they’re feeling and know what they’re thinking. I don’t know how to explain it, but I know that it just happens if you put yourself in the right mindset.  Even if your face isn’t changing, you just kind of sense it and feel it for some reason.

Was there anyone in your past that you could draw on for your own character? For both movies, did you draw on the people you’ve known and met?

People like Kimberly? Oh yeah, definitely. And I knew way too many girls like the character in Thirteen. And there’s this one girl in particular that I based Kimberly on that I went to junior high with. Man, oh man. She was just terrible. “I’m going to pretend to be your best friend and I have a smile on my face and I’m going to go behind you and completely stab you in the back and I’m going to do everything I can and use my sexuality to be in a place of power and to be the queen bee and stir things up, just to stir things up.” And it’s was just so frustrating and so hurtful.

If you could choose a dream role, what would it be?

Definitely, the one I’m doing now. I want to do a cool movie musical. I was in tears when I showed up for the first day of work and it was just rehearsal. We were just going into the dance studio and were in the middle of Times Square and it was just exactly what I wanted to be doing.