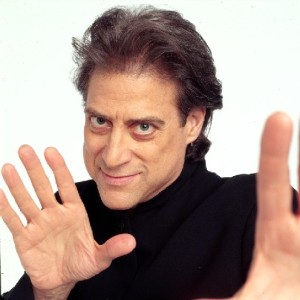 Richard Lewis is No Longer in Pain … Well Sort of …

“It wasn’t a very romantic proposal,” Richard Lewis tells me about how he offered to tie the knot with his wife. “It wasn’t in front of the EiffelTower. In fact, it was in the bedroom — I had tall black socks on and my boxer shorts. I mean, I don’t even want to sleep with myself! And my back was to her and I was looking out the window and she was in bed reading some book of Yiddish expressions and I had my grandfather’s skinny white legs. I’m allergic to the sun, so they can’t be any whiter. It was like a bad Jewish porn movie. And I said, ‘I think I have to.’”

And he did. The ending is happy – an unlikely finish for a man who, for over thirty-five years, made a living out of parading on stage his dancing triplet act of id, ego and superego, showboating his deeply complicated misery, and just barely navigating himself through his stream of consciousness. In his fifties now but still youthful looking, Lewis is happily married and seriously sober.

“I got sober almost twelve years ago,” he says. “I wish I could just have a couple of drinks again, but I can’t. Now, though, I have so much more clarity about who I am and so much more gratitude about being alive. I was somehow able to accept the love of a great woman. I have found a really solid, wonderful, bright, spiritual, hip, rock and roll woman. I found someone perfect for me. My therapist, in some demonic voice that was directed right at me, said, ‘This is as good as it gets.’ And I just knew exactly what she meant.

“I’m living a much more principled life. I’m much more grateful and much more relaxed. This may sound a little grandiose, but I’m much more able to take praise. I’ve worked my ass off for thirty-five years. I basically dedicated my life to making millions of people laugh. I have a beautiful, lovely wife. I don’t have kids. I have some great friends. After I turned fifty, I said, I’m going to stay away from all the screw heads; I’m going to do as much as I can to help other people, and stay fearless on stage. I was on my way out — I was definitely on my way to check out. Once I got sober, I got another shot at doing all this again. I have such a clarity about things now that I go on stage and I’m crazier than I’ve ever been.”

Lucky for us that his bliss does not get in the way of our good time. He wears his newfound happiness well, even though it’s still in basic black. And with his recurring role on the wildly successful Curb Your Enthusiasm (playing himself), Lewis is being discovered by a whole new generation of fans. With this in mind, he has decided to release his classic, decades-old cable specials in a comprehensive DVD collection, called Richard Lewis: Concerts from Hell – the Vintage Years (Image Entertainment).

“I really did popularize that phrase [‘…from hell’],” he says of his creation that has latched onto pop culture like a demon on Linda Blair.  “Forget about comics – I mean comics are notorious for stealing material and not being very ethical, but when I saw it on commercials and things like that, I couldn’t take it anymore. I realized that the best way to get credit is through Bartlett’s [the famous quotation reference resource] and I had a hell of a time getting it in there. I just couldn’t.”

He says, “After five years on Curb, I started to see the demographics of people coming into the concert halls, and I realize I have a whole new fan base. I’m so grateful for Larry.”

Curb creator Larry David, who knew Lewis since they were both twelve-years old, decided to take a chance on his friend to see if the chemistry was right to include him in his ground-breaking, post-Seinfeld series for HBO. Although Lewis doesn’t often sit well with an upbeat, optimistic outcome, the result was prognosis positive.

“People are fanatical about Curb, because Larry only does ten shows a year, and the anticipation level is so high that people know these shows backwards and forwards,” Lewis says. “One guy on the HBO site said that if you play the third episode of the third year backwards, like a Beatles album, Richard Lewis is dead.

“I call Larry Citizen David. I’ve known him since I was twelve, and yet people are very intimidated by him. He’s a genius in many regards. I show up, I yell at him and I go home. It’s the most surreal acting job in history. We are absolutely being the way we are off camera. I often totally forget that I am miked up. I am often screaming about real life stuff. Then the scene will start and we will use some of that in the show. Most people in the show aren’t playing themselves – they’re playing a character. But to know somebody for over forty years and then to hear, ‘action,’ it’s sort of thrilling. I’ve learned so much from Larry. Less is really more with him. When we’re being ourselves, that’s when we’re really scoring. My goal is to set him up and to irritate the hell out of him. When I annoy him, that’s when I know I’m doing my best work.”

Click here to read the rest of this interview!