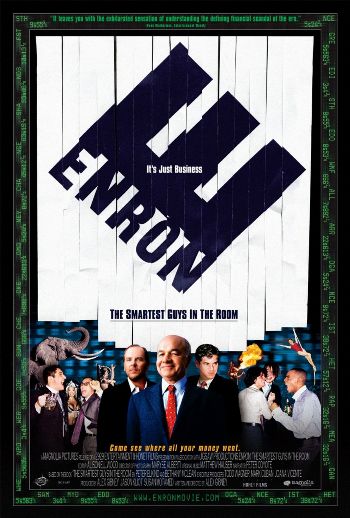 Enron: The Smartest Guys in the Room

The name of Enron Corporation has become shorthand for corporate malfeasance, however most people don’t know the specifics of the story.

How is it possible that one of the most respected companies in the world was completely built upon smoke and mirrors?  How could they get huge, respected firms like Merrill Lynch and the Arthur Andersen accounting firm to completely torch themselves and their business in the name of Enron?  How could Enron chair Ken Lay go from best friend (and a huge contributor) of the man in the White House to looking at doing time in the big house?  Where, if anywhere, were the Enron execs’ morals, their compassion, their humanity?

Like most great tragedies, it all comes down to greed.

Enron: The Smartest Guys in the Room shows the machinations that Ken Lay, Jeffrey Skilling, Andy Fastow and their cronies hatched in the largest corporate scandal of our time, employees and stockholders and the world be damned.

It brings to light the crimes and shortcuts which were shrouded in the dark for so long.  It is told in simple, layman’s terms, so that you don’t need an MBA to follow the money – or the lack there of.

It is a dark and powerful film, more shocking than any horror and yet oddly, sickly fascinating.  In particular scenes when they show Enron traders knocking out the power grid in California – all for fun and profit and political gain – you are staring into the heart of darkness.

The most amazing part of the Enron story is that everybody lost – however the ones who lost the least were the ones committing the worst sins.  It is a tragic story based on greed, conspiracy and hubris.

Already, the story of Enron is getting hazy in the shifting moral compass of the Bush economy.  This movie is vitally important if for no other reason than to keep all that happened fresh in our heads.

The world has to remember that Enron is much more than a punch line to a bad Jim Carrey movie (Fun With Dick And Jane).  People were inconvenienced.  People were ruined.   People died.  All so that a few fat cats could pad their wallets.  Steal from the poor and give to the rich.

The story of Enron is the story of evil.  It is a cautionary tale that must be understood and respected, lest it happen again.  (1/06)