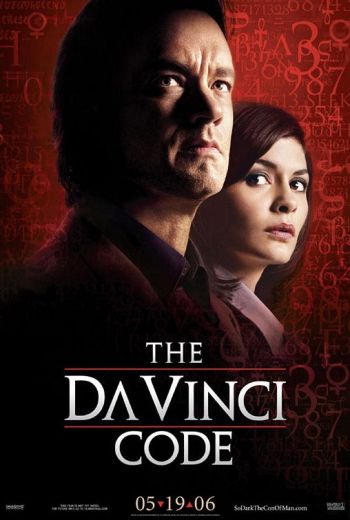 The DaVinci Code has been getting dumped on from all sides.  The Catholic Church has been saying it is sacrilegious.  The fans of the best selling book have said it doesn’t live up to the source material.  The movie critics have been even harsher, calling it slow-moving and impenetrable.

I really have no idea why everybody is so up in arms about it.  The DaVinci Code is by no means a perfect movie, but it is a very good one – an above average, enjoyable and surprisingly smart thriller.

Now, in interest of full disclosure, I’m one of the five people in the world who has never read the novel.  In fact, I never really had any interest, but after seeing the movie I am reconsidering.  So I’m not going into the movie with any preconceived notions, however I also had not built up any fondness for the story and characters.

Perhaps that’s okay, because to a certain extent character is secondary to the story.  There are some interesting characters who have some very intriguing quirks, however they are almost window dressing here, the puzzle box narrative is the thrust of the film.

Tom Hanks plays Robert Langdon, an American professor visiting Paris to lecture on his specialty, the meanings of symbols.  A curator at the Louvre is murdered and stages his corpse to be a clue which only Langdon could translate.  With the man’s granddaughter, (Audrey Tautou), he starts traipsing up and down Europe uncovering clues to a secret which could potentially rock the Catholic Church.  In the meantime, a cardinal (Alfred Molina) and a deadly monk (Paul Bettany) hunt the couple, as do the policeman (Jean Reno) who is certain that Langdon is guilty of the murder.

They uncover a fascinating series of clues, puzzles and traps which lead them closer to the secret.

The DaVinci Code’s action is deliberate and thoughtful, but it can be as shocking as any more base thriller.  The ending, while not quite as original as it probably strives to be, is still smart and satisfying.  Don’t believe all the negative hype.  The DaVinci Code is definitely a movie that is well-worth seeing.  (5/06)