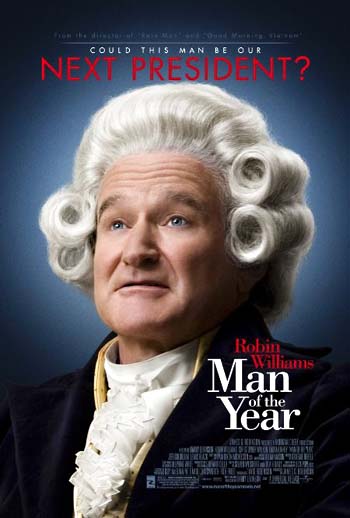 Man of the Year

Sometimes a bad movie has an extremely good coming attractions trailer which makes it look much better than it ends up being. Well, the trailer for Man of the Year looked nearly unbearable, so it is interesting that Man of the Year is actually a much better movie than its promo (and for that matter, the silly poster with Robin Williams in a Revolutionary War era wig) ever lets on.

They are pushing Man of the Year as another dumb Robin Williams comedy, but it’s not that at all. Actually, it is much more dramatic than you’d expect – not high drama, granted, but it has some serious points to make. It doesn’t always make them as well as you’d like and the film does have some tone problems trying to juggle the droll and the sober, however the movie does have an interesting point of view and does take some interesting pot shots at politics and big business.

Williams plays Tom Dobbs, a comedian who has a show which offers an irreverent view into politics (a la Bill Maher, Jon Stewart and Stephen Colbert, all of whom are name checked here). During a Q&A warmup for the show, someone in the audience suggests that Dobbs should run for President. Then the idea takes on a life of its own, with such popular support that Dobbs throws his hat in the ring as an independent candidate.

At first Dobbs takes it very seriously and is as dull as his stuffed-shirt Republican and Democratic rivals. Finally, his longtime manager – played by the always fascinating Christopher Walken, who gives the role more majesty than the script does – convinces Dobbs that he should stand out by using his comedy. Make the people listen to his speeches by getting them to laugh as well as think. When Dobbs steals the show by going totally off the wall at the otherwise stolid Presidential debates, suddenly the comedian has the chance to win the Presidency – a possibility even he considered absurd.

Problem is that the comedy which is supposed to grab the people is pretty much the weak link here. Honestly, there are way too many scenes of other characters cracking up as Williams goes through his tired, rapid-fire, stream of consciousness rants. Only trouble is most of the time, they’re really not particularly funny. Even when Williams does hit on some funny lines (and he certainly does amongst all the jokes he throws up against the wall), it’s all still got a tired sense of been-there, done-that. We’ve seen the wacky Robin for so long that he has become a bit of a parody of himself.

In the meantime, there is a slightly clichéd, but still pretty suspenseful subplot about a sinister company which makes defective electronic voting machines. (Any similarity to Diebolt is completely intentional.) Laura Linney plays a brilliant computer worker who realizes that the machines have a glitch in the program; it will award the presidency to the wrong candidate. This causes the corporate baddies (led by Jeff Goldblum) to try to silence and discredit her.

Out of a job, with everyone thinking that she is either an addict or crazy, she goes to Washington to expose the cover-up. She meets Dobbs – and frankly they fall for each other just a bit too easily – but she can’t bring herself to tell him that he is really not the President. When the truth comes out, Dobbs must make a monumental moral decision.

The politics of Man of the Year are frankly a bit too simplistic, but Levinson has his heart in the right place and the main point of the film is still very valid – it is time for the politicians to stop distancing themselves from the people and try to serve them by being one with them. Man of the Year may not always hit the mark – it’s not as funny as it wants to be, and the drama is a bit overwrought – but overall it is a satisfying and surprisingly trenchant political satire. (10/06)