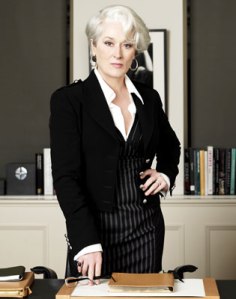 Meryl Streep Walks With the Devil

If there was one film from last summer that carried weight beyond the season’s froth it was The Devil Wears Prada. A snarky but loving stab at the fashion world and Vogue‘s editor in specific, the real secret to the film’s success was Meryl Streep’s propulsive portrayal of the Fashion Witch. Streep made Prada come alive. If only for her performance the film did something more than slip into an over-the-top cartoon of the fashion community’s general irrelevance.

So of course Streep deserves this Oscar nomination as Best Actress for her portrayal, but it’s not like she hasn’t been nominated before – she was nominated for the Oscar an astonishing fourteen times. Born Mary Louise Streep in 1949, this New Jerseyan aspired to be an opera singer. From Vassar to the Yale School of Drama, she was nominated for her first Oscar for her role in The Deer Hunter (1978) and went on to win the Academy Award for her performances in Kramer vs. Kramer (1979) and Sophie’s Choice (1982). Thought by many to be her generation’s greatest actress, she continues to tackle challenging roles from the smallest indies to the huge Hollywood tentpoles.

Though the film is called The Devil Wears Prada, but you seem to play her not as a devil or a witch. What’s your interpretation of Miranda Priestley?

Thank you for saying that she wasn’t things that a lot of people still think she is. I was just interested in making a human being as contradictory and messy as we all are. I think she is an exacting, highly disciplined, demanding, ambitious person who doesn’t take the time for all the nice social lubricants that help make the work place gratifying and fun. So she’s not as good at it as many women are.

Miranda makes a speech at the end of the movie about being the person that everybody wants to be. How did that hit you personally?

I think there is a level of career that demands a certain thing that not everybody wants to give. People have to make their own decisions about what they want from their lives and what really will make them happy and satisfied. From Miranda’s point of view, she wants to excel on every level and it’s really hard.

Have you ever had to make those decisions?

No, show business has been really, really good to me because I can work and take a lot of time off. I’m an extremely undisciplined person and in many ways, the polar opposite of the character I play. But I really understand her, admire some things about her, and see the bind that she is in as a woman.

Did you put together this character from a mix of people?

Unfortunately, we don’t have enough women in power or at least, I don’t know them to copy. Most of my models for this character were male. Compared to some of the people I know, Miranda is so well behaved. She’s almost like a diplomat compared to some people who are very, very powerful in our business.

I know the book was based on an assistant’s view of Anna Wintour, but it didn’t interest me to do a documentary on Anna Wintour and I don’t know anything about her. I only met her at the first benefit auction screening and we were introduced at the very beginning. She’s been a good sport about it but I think she’s been told that I don’t resemble her. It’s much more fun to make the über boss out of my own pastiche of experience.