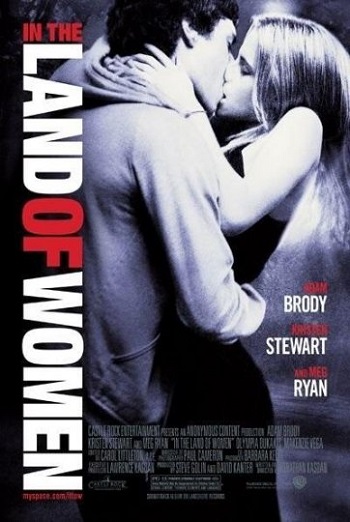 In the Land of Women

In the Land of Women can’t seem to decide whether it wants to be a smart movie with some cliché problems or a clichéd movie with some smart moments.  It ends up being a bit of both, with the smart beating out the clichéd – but just by a hair.

The film was written and directed by Jonathan Kasdan, who has some big steps to follow in as the son of Lawrence Kasdan, who wrote some of the biggest movies ever (The Empire Strikes Back, Raiders of the Lost Ark, Revenge of the Jedi, The Bodyguard) and also had an impressive career as a director (Body Heat, The Big Chill, The Accidental Tourist, Grand Canyon). Not only that, his brother Jake has made a couple of respected-if-slightly-overlooked movies (Zero Effect and Orange County) and was one of the minds behind the cult-favorite TV series Freaks and Geeks.

Growing up in a household like that, you would expect for Jonathan Kasdan to come up with a little more interesting plot that the old “struggling artist gets burned by the big city and goes back to his small-town home to find himself” plot line.

More, specifically he writes of a mid-twenties struggling screenwriter named Carter Webb (Adam Brody) who is dumped by his gorgeous French model actress on the same day that his mother (JoBeth Williams in a too-tiny cameo) learns his grandmother in Michigan (Olympia Dukakis) thinks she is dying.  Therefore, he decides to fly out to Michigan to take care of grandma and try to work on his long-stalled screenplay.  Of course, right across the street from grandma are beautiful, neurotic mom-daughter combo (played by Meg Ryan and Kristen Stewart).

If it sounds a little like, oh, Garden State or Lonesome Jim or Elizabethtown or dozens of other movies you’ve seen over the years, well that’s the breaks.

However, that is the plot that Kasdan has carved out for himself.  On the plus side, he does a pretty good job with the somewhat overdone structure.  He has an ear for dialogue which rivals that of his father.  He can take somewhat predictable characters and make us care for them, which is a talent in itself.

His best move was hiring the three lead actors for the film.  They make the movie feel real even when it doesn’t seem to deserve it.

Adam Brody makes the jump from TV (The OC) to movies with a surprising ease.  He does have leading man written all over him, sort of like a cuter Shia LaBoeuf.  The weight of the story is mostly dropped into his lap and he is able to make his character funny and sweet even when he is completely egocentric and indulging in self-pity.

Kristen Stewart – who has grown quite a bit in the few years since playing Jodie Foster’s asthmatic daughter in Panic Room – has a wonderfully natural presence as the young teen just growing into her own beauty and trying to understand why she resents her mother so much.

The mom role, though a semi-supporting part, is the best part Meg Ryan has gotten in several years.  She downplays (but doesn’t totally abandon) the traditional Ryan cutesy touches and also doesn’t overdo some of the more melodramatic moments the script tosses at her.

That said, some very talented actors are totally misused – particularly Olympia Dukakis (Moonstruck) whose eccentric and slightly addled grandma is just a sad waste of a great actress.

However, even if it is not quite as good as it could be, In the Land of Women is a pretty decent debut film.  I’d like to see what Jonathan Kasdan comes up with next.  (4/07)