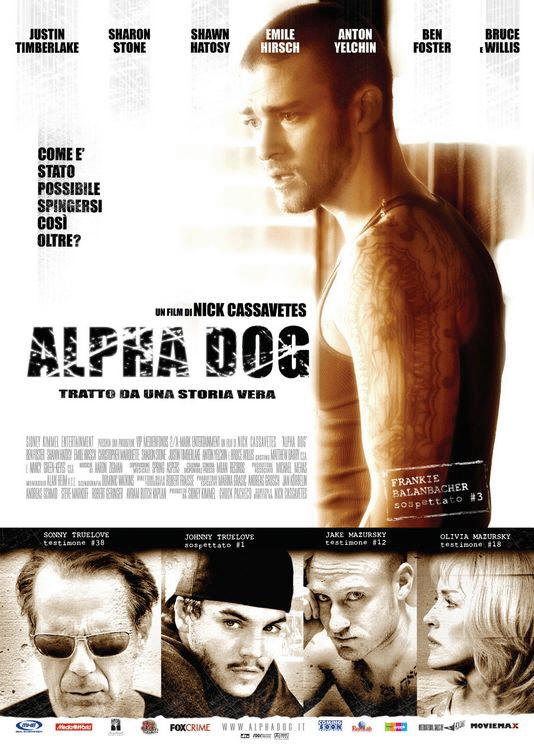 Alpha Dog wants to be a disassociated youth classic like The River’s Edge or Kids, but it doesn’t have the brilliant writing and acting of the first film, nor the fearless hedonism of the latter.  However, Alpha Dog does handle its disturbing true story much better than the extremely-similarly-plotted recent film The Chumscrubber. (Honestly, I’m not sure if that film is also based on the same true story which Alpha Dog is — that of California small-time-thug-turned-fugitive Jesse James Hollywood — or if the huge plot similarities are merely coincidental.)

What Alpha Dog does have — in spades — is cool and bad attitude.

The latest film from Nick Cassavettes — whose father John did more than his share of interesting peeks at the back-alleys and back rooms of the underworld — peers at the dark side of recent southern Cal decadence with a story that periodically fascinates, titillates and frankly… annoys.

Part of the problem with Alpha Dog is that its main character, Johnny Truelove (they changed the names because Jesse James Hollywood’s has only recently been caught and his case is still in the courts) is sort of a supporting character in his own life.  He is supposed to be this big time local hood, but apparently all that Truelove really has is a reasonable amount of money, and an inflated reputation, a wiseguy family (Bruce Willis and Harry Dean Stanton) and hoodwinked friends (Justin Timberlake, Christopher Marquette and Shawn Hatosy) who spend most of the film covering his ass.  Emile Hirsch does a really good job in giving this contradiction of a character an interesting face and nuance, and yet the character is such an obvious self-impressed loser that he’s hard to find any sympathy for or interest in.

One scene where Truelove cowers in the back room while his arch-enemy Jake (Ben Foster) robs and vandalizes his home shows what an empty despot he is.  Several other scenes impart the fact that Truelove is a coward who can only stand up when surrounded by friends or family to do the dirty work.  Whether this is true to Hollywood’s tale or not, I have no idea.  I just know that in a movie it’s pretty tough to get all worked up about the fate of a weasel like him.

The story all springs from a terrible miscalculation on Truelove’s part, when he is owed a lot of money from that crazed former-friend-turned-enemy, he and his buddies kidnap the guy’s younger brother on a whim, to use as a bargaining chip.  At first it’s all a joke for everyone, they take good care of the kid, let him hang out with them, introduce him to drugs and girls.  Of course, it’s only a matter of time before before the real seriousness of their act becomes all too clear.

The acting in the film is uniformly strong, with (shock!) pop star Justin Timberlake standing out as a loyal soldier and fun party boy who is almost always trying to keep Truelove’s house of cards from tumbling down.  Anton Yelchin (Hearts In Atlantis) is also amazing as the wide-eyed victim, a kid who can overlook the fact that he is being kidnapped because he is finally entering the sex-and-drug fueled world of the cool kids.  However, Foster and Hatosy, normally very capable actors, tend to go too far with their over-the-edge characterizations.

The older actors here are really pretty much shuffled off to the background, but Bruce Willis does a nice job as a mob dad getting tired of covering for his fuck-up kid and Harry Dean Stanton is always fun playing… well Harry Dean Stanton.  Sharon Stone is more hit-or-miss as the mother of the kidnapped boy, she is actually okay through much of the movie, but the whole role is sabotaged by a late scene, with Stone in a fat suit, which borders on parody.

I can see why this story appealed to the filmmakers — it has sex, drugs, music, violence, decadence and tragedy.  However, while much of Alpha Dog is rather fascinating it never quite pulls it together.  (5/07)