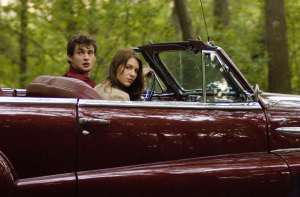 Susan Minot’s novel Evening was embraced by a huge readership upon being released. The novel is about the choices people make and how they are formed by them. A woman at the end of her life is reliving (and revealing to her grown daughters) the story of a great love that got away – one that the daughters were not aware of. The daughters don’t understand how much of the story is true and how much is the dementia of illness and approaching mortality. It is a poignant reminder that no matter how close you are to someone in your life, you never truly know all of his or her secrets.

Novelist and screenwriter Michael Cunningham (The Hours, A Home at the End of the World) was uniquely qualified to change a beloved piece of literature to the film. However, it was not a job he took lightly.

“I almost said no because I didn’t want to be the guy who messes up a book as beautiful and as accomplished as Evening,” Cunningham recalled recently. “When they called me up and asked me to do it the first thing I did was call Susan, who I knew slightly, and said look I don’t know what I have to do working with you, but I know I’m going to have to push for real changes. There are dozens of characters in this novel, each of them beautiful and richly drawn, and I’m not going to have room for them. I’m going to have to mess around with it in all kinds of ways and if that’s a problem for you tell me right now and I won’t do it. My first loyalty is always to the novelist. Susan, to her huge credit, said, ‘Well, no, that’s why they called you, because clearly we need another pair of eyes on this. Of course it needs to be altered to fit another form. Go.’”

The main character of Ann Lord is played in flashbacks by Claire Danes, who has carved out an unique career for herself in the years since first capturing our attention in the cult-favorite TV series My So-Called Life. Since then, she has proven to be an unusually versatile actress, equally comfortable in drama (The Hours and Brokedown Palace), splashy melodrama (Romeo and Juliet), romantic comedy (Shopgirl and The Family Stone) and big-budget action (Terminator 3: The Rise of the Machines and The Mod Squad). Evening marks Danes’ reunion with screenwriter Cunningham, who also was behind The Hours.

British actor Hugh Dancy plays Buddy, a tragic character from the past (and one who was not in the novel.) Dancy has been acting professionally for less than a decade, but he has put together a consistently interesting body of work with films like Blackhawk Down, Blood and Chocolate, Ella Enchanted and Beyond the Gates. (No one is perfect, though, he was also in Basic Instinct II.) Dancy is currently finishing up a successful Broadway run in the World War I drama Journey’s End.

Also from theatrical roots is Mamie Gummer, who has appeared in several plays. Evening is her first major film role, though she has done small parts in a few other films, most recently The Hoax. If Gummer looks familiar to you, perhaps that is because she is a near-spitting image of her mother when she was young. That mother just happens to be probably the best actress of her generation – Meryl Streep. Now before you get any ideas of nepotism, Gummer is the real deal as an actress. In fact, when she was hired for the role of young Lila Wittenborn, director Lajos Koltai did not even know of the relationship.

Only later did Streep come on board the cast of Evening – playing the same character as her daughter grown old – and then it was not due to Gummer’s actions. Streep was given the script by her long-time make-up artist J. Roy Helland and was so taken by the script that she decided to do a cameo role. Streep and Gummer were not the only mother/daughter team in this production, either. Famed British actress Vanessa Redgrave played the main character of Ann as a dying old woman in modern times and Ann’s older daughter was played by Redgrave’s own flesh and blood, Natasha Richardson.

“It was a unique, very special opportunity to play mother and daughter on the screen,” Richardson said. “Not only to be playing these characters, but bring all our history, all our baggage, all our love, all our painful times to serve these characters in the film. It was great to be able to do that. It was also very painful because it was evocative of a lot of things and seeing her lying there on that bed, very convincingly, looking very seriously ill, it of course makes you project the future and the past, like when my father was dying. So, it was a very special experience.”

A few weeks before Evening was due to debut, we met up with Danes, Gummer and Dancy at the Regency Hotel in New York to discuss the film.

What was it like to work on certain scenes that seemed intense – like that rain scene with Claire and Patrick [Wilson]?

Claire Danes: They were so exquisitely written that I didn’t have to work too hard to analyze them or refine them. They just kind of play themselves. We read them a couple of times in rehearsal, and it just worked. I think it was so clear of what it was asking of us, that we had very little resistance, so we were really fortunate. I love that scene.  I love that scene to act and I love the scene with Mamie in bed, because it was so…

Claire Danes: …exciting to play because they have so many shifts and turns. They have a great rhythm. A great integrity.

Hugh, did you find in playing this role with the tension between you and Claire that it heightened your ability to connect with her?

Hugh Dancy: No, no, no. When you work with another person as an actor, nuances of character in a relationship are a result of close understanding of the script you’ve got and then the ability to realize it. I really do believe that. I’m not just trying to avoid your question. I’ve worked with actors before that I’ve liked very much and felt the results were not so wonderful. And I’ve worked with actors and actresses that I really didn’t feel that much for and felt like we achieved some kind of so-called chemistry. I think it’s acting. That’s what it comes down to.

Mamie, what was you favorite scene?

Mamie Gummer: The bedroom scene was my favorite. The writing was just so beautiful. I loved it from the minute I read the script. I just fell in love with that character and that scene. I really didn’t have to do anything. You just say the words, and how could your heart not break?

Claire Danes: The onus was really on you in that scene and I was just having the best time watching. (laughs from both) You didn’t know.

Mamie Gummer: I have sisters. I felt that the intimacy between girlfriends was lovely that that was represented. Because you don’t see that a lot in movies, laughing and crying at the same time.

For this movie there are a lot of really strong roles for women – though of course, Hugh, your role and Patrick’s were strong male roles. What was it like working on a film that had so many big female roles from an actor’s point of view?

Hugh Dancy: It wasn’t so notable… I’m trying to think of how to formulate this… It was great working with these great actresses. That’s a given. Working with Claire and Mamie and Glenn and so on. And being aware that these other actresses are also going to populate the other side of the story. But that’s not to say that the experience was 100% estrogen. It didn’t particularly feel like that in the moment – partially because I was there and Patrick was there, but also because we were surrounded by crew. You know how it is. Even more exceptional to me than just the presence of that many females in the movie was the quality of the writing. The questions it tackled. Then the way that – in my mind – it succeeded attacking these big questions. That felt very clear, even when we were doing it. I felt it was something unusual.

Is there an underlying message here in choosing a mate? Is it okay to pass over the true love and go with someone else – is that a regret your whole life?

Mamie Gummer: That’s the big question. What’s right? Lila seems to have compromised herself, which is weak. But at the end, who’s to say really?