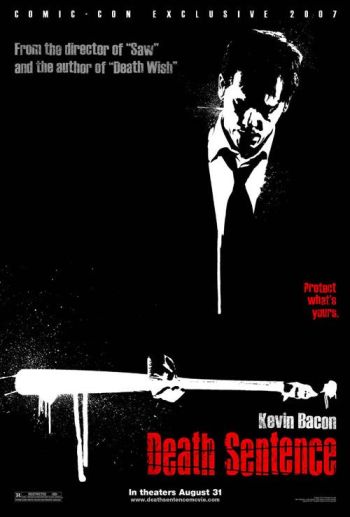 In the early 1970s, a pulp writer named Brian Garfield came up with a clever urban jungle nightmare, writing Death Wish, a novel about a business executive whose family was destroyed by a random act of criminal violence.  When the crooks get off scott-free, the guy takes up walking around Central Park at night, offering himself up as a victim, and killing the criminals who take the bait.

This was in the midst of the wild years of Manhattan crime and became a favorite city-dweller fantasy.  (At least, until Bernard Goetz showed the flip side of vigilantism several years later.)  The novel was turned into a smash hit film starring Charles Bronson – who himself made the jump from well-known actor to action superstar with the role.

The movie of Death Wish spawned (at least) four sequels – none of which was nearly as good as the extremely effective original film.  However, very few people now remember that the book had a follow-up, too.  Not an official sequel, but an extremely parallel story released by Garfield in 1975 (the year after the movie first Death Wish movie) called Death Sentence, also about a boring office exec whose family is shattered by an act of criminal violence and then takes the law in his own hands when he gets no justice from the legal system.

The movie of Death Sentence is finally coming out thirty-some years later.  This may seem way too late to take advantage of the book’s slight name recognition and the no-longer-quite-so-topical storyline – until you consider that this film is beating out of the gatesThe Brave One, a similar-sounding but higher-profile vigilante drama with Jodie Foster.

Well, Death Sentence is not nearly as good a film as Death Wish, either.  (We’ll have to wait until next month to see how The Brave One compares.)

Death Sentence certainly has its moments and can be extremely suspenseful in parts, however there are just too many absurd plot inconsistencies to recommend it whole-heartedly.

Kevin Bacon – who is never less than interesting as an actor, but unfortunately here not much more either – plays Nick Hume, a well-off suburban man who is driving his son home from a hockey game when he gets lost in a bad neighborhood.  When he stops for gas, his son is killed in the station during a gang-initiation killing.

When Hume senses that the prosecution is going badly and the most the killer will get is 3-5 years behind bars, Hume double-crosses the prosecution and lets the killer go free, just so that he can maybe screw on his courage to kill the guy and his gang-brothers.

This doesn’t seem to make much sense – even if he was angry that his son’s killer was not getting enough time wouldn’t he rather him get some time?  Why would a middle-aged man with no history of violence expect that he could take out an entire group of gang-bangers?

Yes, I know that was the story of Death Wish, too, but it seemed to make more sense there – and at least Bronson’s character was smart enough to get himself a gun right away, not just before the climax, when Hume finally gets around to it.

The main difference from the earlier story is that the gang knows who Hume is as well, and comes gunning for him and the rest of his family.  This leads to some extended action sequences – some of which are very effective (particularly a long foot chase which climaxes in a garage).  However, most of them are reached merely because Hume, the head gang-banger (Grant Hedlund) and a sympathetic policewoman investigating the case (Aisha Tyler) all always seem to make the absolute wrong moves or decisions.

If you are willing to overlook these gaping plot inconsistencies, Death Sentence is a taut little thriller.