Ron Livingston at the New York press day for “Holly.”

Rescues Holly and Finds Something of Himself

When I first met Ron Livingston, he was a featured personality at the New York Independent Television Fest kicking off his Fox TV show, Standoff (he starred as Matt Flannery, a senior FBI negotiator). He had come to my attention previously through the film The Cooler, but he had been on the map since he was in the popular hit Swingers in 1996 (which also put into motion the careers of Vince Vaughn and Jon Favreau and director Doug Liman).

His other notable acting credits included the Oscar-winning Adaptation, the cult hit Office Space (he starred opposite Jennifer Aniston), the mini-series Band of Brothers (and was nominated for a Golden Globe as a result) and eight episodes of Sex and the City.

Though Livingston lives in Los Angeles, he did a stint in a very different place, Cambodia, to star in Holly – a hard-hitting examination of the child sex trade in Southeast Asia through the eyes of one 12-year-old girl and the American who becomes her inadvertent protector. Created by a team of Israeli filmmakers, the indie production was shot in real brothels with actual sex workers as extras; Livingston endured the heat, strenuous conditions, and various risks such as imprisonment and intestinal parasites to create an incredibly authentic performance and live to talk about it.

You’ve been doing some heavy films of late, Holly and Music Within, which are different for you having made your reputation in a comedy like Office Space or TV series like Sex in the City. Was this a conscious decision?

Is this the new Ron Livingston now?

I don’t know. One of the fun things about being an actor is that you can’t do the same thing twice because the next job I do I’ll be a couple of years older; I’m going to be down the road a bit more. No one’s going to hire me to be a 24-year-old anymore. I have to discover what story I can tell now. I don’t know what they want the “new Ron Livingston” to be.

What kind of challenges were there with this film, Holly?

This movie was a little bit of an experiment for me. I guess the simplest way to describe it is, when you act – you can act big, or you can act small. And this is one of the films, over a course of a year, where I tried big for some films, and in this one I tried to be small just to see what happened. I think it’s a movie that required it. [I played] a guy, Patrick, who is in a foreign land and sort of spinning his wheels, not really attached to anybody. He’s caught up in his own head, really narcissistic. When I thought of the story for Patrick, I thought the story was about a guy who was swallowed up in himself, who then engages in the outside world and realizes he’s part of something bigger. And so, it worked really well to let it be small where it could be small and find only a couple of moments to make it big.

There’s ambivalence to your character Patrick and why he is doing what he’s doing. There’s a fine line as to how you read Patrick.

Yeah, there’s a Lolita parallel in this story. You look at a movie like The Professional, which I think is a more traditional western telling of this story – good guys and bad guys. In that movie, I think they made a very conscious choice of wanting to protect this little girl. But because this movie is about exploitation of children, and using children for sex, when I read the script, I sort of felt that it needed to be there. Because it was a test that Patrick had to pass. So often with child abuse, it happens behind closed doors. I think a lot of times, the approach is, “Oh he would never. How could you possibly think?” A lot of times, that hides what’s actually going on. I think there’s a scene in the movie, where Holly gets confused where she’s at – between girlhood and womanhood. It was a test that Patrick needed to pass that he not be confused with where she was at – between girlhood and womanhood. But it was definitely a test he needed to be put through.

Did you know anything about child sex exploitation before this movie?

But you learned a lot more in doing this movie?

Yeah. It’s everywhere. Cambodia is special in only that. They can walk up to you there and proposition you on the streets. Not proposition because little kids want to have sex with you, but because there’s such a flood of white guys that are there to have sex with kids. We’ve got child trafficking in the Bronx. We have sexual abuse of children in all 50 states. It’s everywhere. And closing your eyes to it, and thinking it’s a terrible, terrible thing far away, is what allows it to happen. And so, we’re all responsible for it, but I don’t mean that in a way of guilt. I mean that in that we all have the capabilities to not allow it to happen in the hundred yards that surround us. If we did that, if we make sure it didn’t happen within the hundred yards around us, it would be gone. 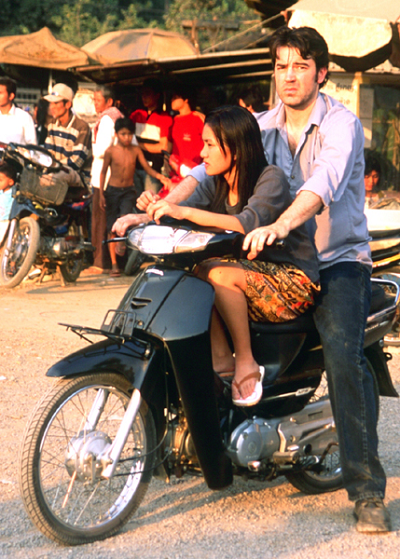 Did you fear or worry about the dangers of making this film?

Yeah, this was tough. We had about 40 or 50 security police with us, armed with machine guns. The thing you realize is that they weren’t there to keep the people away from us that might want to stop what we’re doing. They were there – if they got the phone call – to take us in [laughs]. So, it was a little bit “flying in the face” of it. I read some journalist’s materials about how danger doesn’t look like danger. You don’t know you’re going to be killed until you get killed. I didn’t feel like we were in trouble. Cambodia is an amazingly safe place. I saw 60-year-old men, with stacks and stacks of money, sitting cross-legged on a blanket, changing currency in the middle of an open bazaar. Nobody would even think of robbing this person. The reason for this is – it’s mentioned in an article I read about a guy who stole this scooter but didn’t get 400 yards until all the locals tackled the guy and poured gasoline on him and lit him on fire. So, in some ways it’s a very, very safe place. In some ways, it’s not. There are things you can do and there are things you can’t do. During shooting, we weren’t sure if what we were doing was the thing we could do or couldn’t do.

How was it on set, working with children who came from orphanages and such places? Was it difficult to leave them?

My first concern was how many children are we going to exploit to make this movie about exploited children. I sure hope it was under ten. My first concern was the girl who played Holly. And they did a fantastic job of finding Thuy Nguyen, who is extraordinary gifted, possessed of that talent of an actor who knows what the truth is and stubborn enough not to let someone talk her out of playing it. She had a real empathy for this character and what she went through. The trick was how do we tell this story that protects her from the experiences of this girl? As an actor, you want to get inside the head of the character. But you don’t want your 14-year-old girl to get too far into the head of this girl. Ultimately you have to be creative sometimes in the way you shoot things so that things happen off-camera. We did a very good job of managing to do that. We’ll ask Thuy in five years and ask what she thinks. [laughs]

Were there any days that the subject of the film became overwhelming for you?

The hardest days were the days when we were doing a scene, they had to shoo the hordes of street kids from the lunch table, to make sure there was enough food and water for the crew. One of the things that is hard trying to do a good thing in the world is when it makes you realize how hard it can be to do a good thing. In America, we’re used to results. If you don’t win, you lose. I think part of the story of this movie is that a good deed attempted is a good deed, regardless what happens. What happens is not in human hands. What happens, happens on a higher level. We can’t fix everything. But that doesn’t mean we should fix nothing. Try to fix something, and then pour yourself a glass of lemonade and take a seat and enjoy the evening.

How different was that experience from making Music Within [the true story of Richard Pimentel, who returns from Vietnam severely hearing-impaired, so he fights for the rights of Americans with disabilities] which came out recently?

Music Within was a little easier. It was funny. There are things in Holly that are funny and charming. I think what ties them both together; they’re both about people who think of themselves as broken, damaged goods and not worth anything. In Holly, it’s both Holly and Patrick who feel that way. In Music Within, I think Richard has that experience. Art [Honeyman played by Michael Sheen] doesn’t have that feeling about himself, and I think ultimately Richard doesn’t feel that way about himself. Both of these characters, at the end, change the way they think of themselves. They feel that the world they live in is broken, but it can be fixed.

You have had an opportunity to explore these deep subjects. How does this contrast with your TV experiences?

Both of these films I made before I did the television show, Standoff, last year. When I got back from Holly, I was pretty spent. I had an intestinal parasite at the end of it. I think I lost fifteen pounds at the end of shooting. The last week I pretty much couldn’t keep anything down except vegetable broth. During that week we had a whole program of doing the running stuff, the sprinting stuff. So, I was kind of ready to do something light and fluffy for a while, and sit in my nice armchair, go to work making some television for a while.

Would you do it again?

The television or the parasite?

In a heartbeat. I think before I went to Cambodia, I would put out some feelers as to what they thought of the movie. I don’t know how welcome we are there.

Are you going to make a guest appearance in the Sex in the City movie?

I’ll be appearing in the audience, [watching the film]. It’ll be nice to see the girls together again.