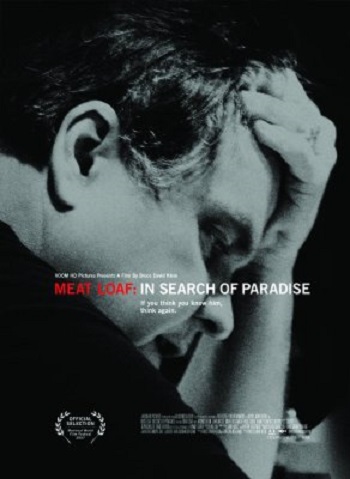 Meat Loaf: In Search of Paradise

Meat Loaf: In Search of Paradise starts where most concert documentaries end – and in doing so shows you something you never get to see. The 59-year-old rocker leaves the stage to thunderous applause, walks back to the dressing room, slumps to the floor and lays there exhausted, panting, and seemingly unable to get up.

Then again, nothing about Marvin Lee Aday’s career has ever been normal.

He has been able to sustain a rock career for going on forty years (his first record, as part of the one-off duo Stoney & Meatloaf, came out in 1971). This long livelihood is basically forged on the strength of two smash hit albums – one of which was a sequel to the first. He never had the traditional rock star look (he’s always been notably overweight) or sound (a dramatic mix of arena rock and Broadway pomp.) Any album he has made without the Bat Out of Hell banner has essentially tanked – such as Dead Ringer (1981), Midnight at the Lost and Found (1983) and Welcome to the Neighborhood (1995). Meat Loaf has disappeared from the studio for years on end – sometimes due to physical or mental ailments, sometimes due to drugs and excess, sometimes spending the down time putting together a respected-but-decidedly-minor career as a supporting actor.

However, what people really remember Meat Loaf for is Bat Out of Hell, and Aday has been riding that gravy train since 1977.

The original Bat, which came and spat in the face of the prevailing disco and punk rock rhythms of popular music at the time, spawned three hit singles and became one of the largest selling albums of all time. After over a decade in the dregs of the music charts, unable to follow up his stellar debut, in 1993 Meat Loaf returned to the Bat Out of Hell well. He regained his mojo with the frankly-inferior-but-staggeringly-popular sequel, Bat Out of Hell II: Back into Hell. Thirteen years and two records later, he went back to the well again, recording Bat Out of Hell III: The Monster is Loose. The latest disk didn’t exactly take off, but it did spawn a world-wide super-tour in which Meat Loaf planned to perform the entire Bat saga.

This documentary chronicles the opening Canadian leg of that comeback tour.

Many of the talking heads here – including Meat’s manager, sound guys, roadies, his flamboyant vocal coach, group members and bandleader Kasim Sulton (formerly of Todd Rundgren’s side group Utopia) pretty much kiss up to him – telling us how great he is, what an artist he is, how much he gives of himself. Which is fine… you sort of expect those fawning quotes in a rockumentary.

The filmmakers tread a little lightly around their subject as well. This is particularly noticeable with the glaring omission of any mention of the nasty split between Meat Loaf and Bat Out of Hell songwriter/producer Jim Steinman in the year leading up to the making of the third Bat album in 2006. In fact, other than being mentioned a couple of times in graphic scrolls about the history of the albums, Steinman’s contributions to the Meat Loaf’s work and persona are completely ignored.

Yet the film is fascinating just because of its central character – a shy, insecure, funny, slightly hypochondriacal, kind of anal-retentive man who somehow took on the role of a rock star.

He is not completely comfortable with that role, as shown in some scenes of him in the rock star environment of pre-show meet-and-greets, where he acknowledges that he has absolutely no idea what to say to people in these situations. (He usually falls back on a variation of “Hey man, I’m Meat. Nice to meet you…”)

Or as movie star Dennis Quaid refers to Meat Loaf in a backstage interview – “A great family man. Loyal to his friends. A little neurotic…” Later Quaid adds, “He’s an angster. He likes to angst about things. He enjoys angsting.”

It is this sense of angst, this neurotic vibe which Meat Loaf gives off which makes him a hell of a lot more interesting than most shallowly self-satisfied rock stars. Aday grew up a fat kid and to this day he feels the need to work twice as hard to get people to like him.

“Right now, I’m so tired that I don’t know what I’m doing, and I hated every minute of it,” Meat Loaf tells the cameraman after the first show in Victoria, BC. “I’m really bummed. I didn’t like the show. It wasn’t good for me.”

Later, he acknowledges that he is never quite satisfied with any show he has done and is still waiting for the perfect show.

Frankly, judging from the live clips peppered liberally throughout the film, Meat Loaf’s performing style has become more affected over the years – as if it was ever subtle. His vocals have more stops and starts and little hitches and hiccups in many of the songs – which become actively distracting. The hits “Hot Summer Night (You Took the Words Right Out of My Mouth)” and “I Would Do Anything for Love (But I Won’t Do That)” are particularly hard to sit through due to this odd stylistic quirk. Not that he can’t sing anymore – the songs he does straightforwardly still rock, but he is trying to add a drama to the songs that they just don’t need. They were dramatic enough as it was.

Much of the documentary focuses on a minor controversy of the tour – when performing the concerto to teen lust “Paradise by the Dashboard Lights,” the nearly-60-year-old singer acts out hitting on a much younger and gorgeous singer. (Aspen Miller is 28 but looks even younger.) This causes a bit of bad press – mostly calling the choreography creepy or sordid – and making Aday obsess on how to make this problem subside.

It all seems like a bit of a tempest in a teapot, though. Of course, the singer is older now, but the subject of the song is always the same. The entire lyric of the song is couched in the fact that it was a memory of a past lust. This is how a man his age would remember it – him at his current age, her as she was back then. That is how she would be in his memory, but he only has to look in the mirror to see himself. Besides, this is all theater, as everyone tries pointing out.

If some critics want to be pithy and throw in a few dirty-old-man jokes, just move on. For someone who earlier in the film stated flatly that he doesn’t listen to critics, because for good or bad they are usually wrong, Meat Loaf sure seems to spend a whole lot of time tweaking his show to try to make it more palatable for the rock writers. It isn’t quite worth the obsession that Aday and the filmmakers put into it.

Yet, that very obsession to small details is vital to an understanding of the singer. The fact that the star isn’t exactly at the top of his game – and knows it – makes this movie even more intriguing than most rock docs.

Perhaps the appeal of Marvin Lee Aday as a person is best summed up in a quiet moment between gigs. The filmmaker asks an unpacking Meat Loaf about people expecting him to always live the rock star glamour life. Meat answers back, tongue-in-cheekly, “Well it is, can’t you tell? How glamorous is this? My baggie with my Wheat Thins in it? This is pure glamour.”

This kind of little, personal insight into a smart, funny, nervous, quiet man who is in a little over his head is what makes Meat Loaf: In Search of Paradise essential viewing for rock fans.

The film closes out on Meat Loaf, walking backstage right after a show, quietly gasping to his manager, “I tried. I tried.” In that brief statement, the filmmakers capture all you really need to know about the singer.