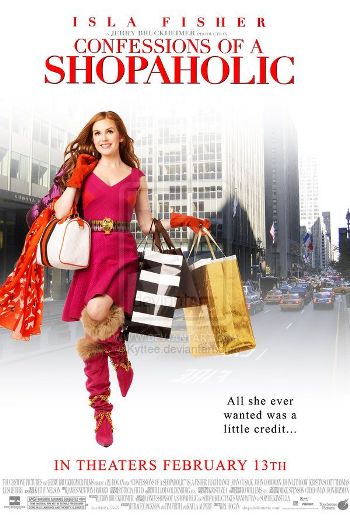 Confessions of a Shopaholic

CONFESSIONS OF A SHOPAHOLIC (2009)

It is not completely the fault of Confessions of a Shopaholic that it is coming out at probably the worst possible time for its breezy and irresponsible consumerism.  After all, the film was undoubtedly green lit at least a couple of years ago.  Who was to know back then that the world economy was soon to be nearly destroyed by the same kind of reckless overspending that this film is trying to pass off as frivolously adorable?

Isla Fisher, who is as cute as a box of kittens, does her best to make the main character lovably impetuous rather than dangerously negligent.  Three or four years ago, it probably would have even worked.  Now, it’s hard to feel too much sympathy for a woman who has so little self-control that she can’t stop purchasing designer clothing even though she is unemployed, can’t afford the rent and has maxed out twelve credit cards.

Fisher plays Rebecca – a writer for a small-time gardening magazine who is somehow able to live in Manhattan at a gorgeous, huge apartment with her similarly young and underemployed best friend.  Since her mother forced her to wear hand-me-downs and thrift store clothes during childhood, Rebecca has become disturbingly obsessive about buying clothes.  Literally, she talks about department stores like romance novelists talk about swarthy gardeners.

Rebecca walks up and down the streets of Manhattan, wooed by the plastic mannequins (which move and wink at her and everything) in store windows to spend money.  These faceless mannequins, which are supposed to be a charmingly quirky representation of Rebecca’s lust for fashion, actually are really kind of creepy.

When her magazine is shut down, Rebecca takes a shot to get her dream job at a swanky glamour magazine.  Through a series of unlikely coincidences she does not get that job, but ends up at a sister financial magazine.  Irony alert – the woman who can’t handle her own finances gets a job trying to teach the everyday folk how to save.

Now I’m sure most viewers who know anything about publishing will be wondering how a woman who knows absolutely nothing about business could get a job at a business mag.  I do buy it though – if only because my first writing job out of college was for a business paper and I knew very little more on the subject than Becky.  Of course, I was an intern who only got paid for published articles and lasted for six months – and she becomes a media sensation with a tidy salary.  That part, I don’t buy for a second.

However she does get the job – with a gorgeous British boss (Hugh Dancy) who turns out to be a diamond in the rough.  He may dress down, but it turns out that he is smart, rich and (in the film’s parlance) “speaks Prada.”  This leads to a slightly unbelievable love story – Dancy is charming in the role, though we never quite see what he sees in Rebecca beyond her obvious cuteness.  Lord knows, she gives him very few reasons to like her.

The bad guy in the film – and the worst of many bad ideas in the plotline – is debt collector who calls Rebecca many times, puts up with a series of ridiculous excuses before finally coming after her.  Yes, the collector’s methods are somewhat over the top and sleazy, but isn’t it awfully simplistic to blame all of Rebecca’s problems on him?  I know that this film considers this to be a ridiculous notion, but if Rebecca wants the creepy debt collector to stop hounding her, perhaps she should try actually paying off her credit cards.  I know it’s an outrageous suggestion, but it may just work.

Then, eventually, she does just that – by making money in a completely hypocritical way.  She has learned that she does not need material items to be happy, so she takes advantage of the weakness of other shopaholics who are just as shallow and vulnerable she was.

Even more so, because in Rebecca’s charmed fairytale life, being destitute does not lead to homelessness, joblessness, hunger, illness and destitution.  The worst thing that happens to her is that she is vaguely embarrassed on television, has a short fight with her best friend (due to a set of circumstances which are improbable, to say the least) and has to break up with her dreamy British editor – temporarily.

Yes, I get the fact that I am probably taking Confessions of a Shopaholic way too seriously.  It is supposed to be a frothy fantasy chick flick like Legally Blonde or Sex and the City, not a realistic look at life in Manhattan.

Like I said earlier, it’s just Confessions of a Shopaholic‘s bad timing that its whole point of view and values system seems irretrievably dated and wrong-headed right now.  In what would probably be a capitol offense for Rebecca, Shopaholic is wearing last year’s fashions.  This movie is so 2007.