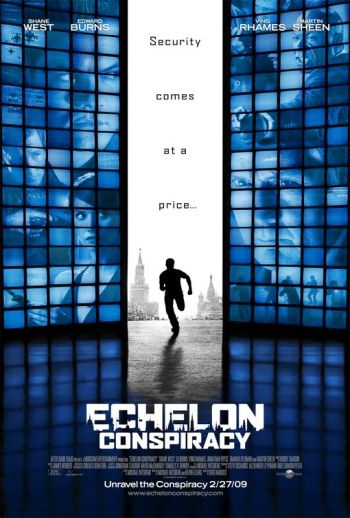 You’ve seen the basic storyline of Echelon Conspiracy before – and you’ve seen it done better.

There is a history of this in sci-fi films, including classics like 2001: A Space Odyssey and WarGames and potboilers like The Demon Seed.  In the post-Bush Patriot Act era, this plot has been the backbone for Eagle Eye, Live Free or Die Hard, WarGames: The Dead Code and others.  In fact the DVD release is not at all coy about its similarity to Eagle Eye, the film is previewed with a coming attractions trailer for that not-exactly-current title.

None of this recent spate of films were very good, nor is this one.  However, despite some truly dumb story twists and some huge plot holes, Echelon Theory is periodically entertaining in a cheesy action way.

It’s not totally Echelon Conspiracy‘s fault that its government-skewering anti-Patriot Act storyline feels a little bit stale – the film has been sitting on the shelf for a while, playing at the Cannes festival in 2008 under the name The Gift.

Shane West (ER, Once & Again) makes a handsome but slightly bland lead here.  He is Max Peterson, a computer security expert who receives an anonymous package with a mysterious cell phone while on a business trip in Bangkok.  Soon the phone is receiving texts which are oddly prophetic – suggesting he change his flight, which ends up crashing, offering a stock tip which is wildly successful, telling him to go to a Prague casino and pointing out machines which will be hitting the jackpot.

His newfound luck does not go unnoticed though, causing him several visitors – a hardened FBI agent (Ving Rhames) investigating the texts, a former-Fed who now runs security at the casino (Ed Burns) and a beautiful American photography student (Tamara Feldman) who may know more than she lets on.

This leads to a series of international adventures, during which Max realizes that the force behind the texts has some very shady motives.

It’s hard to respect the guy too much as a hero though – in one scene where assassins break into an apartment he is sharing with a woman with whom he has just had a one-night stand, he hides in the bathroom as she fights them off – not even helping when they burst into the room he is in, until he absolutely has to act.

All of it is rather predictable – though Martin Sheen has a little good-natured fun playing against type as the neo-con head of the NSA – and the climax is rather underwhelming (and a little too similar to WarGames for comfort).  Still, Echelon Conspiracy has a few interesting action sequences which will make it worthy of a rainy day rental – as long as you don’t think about the plot too much.