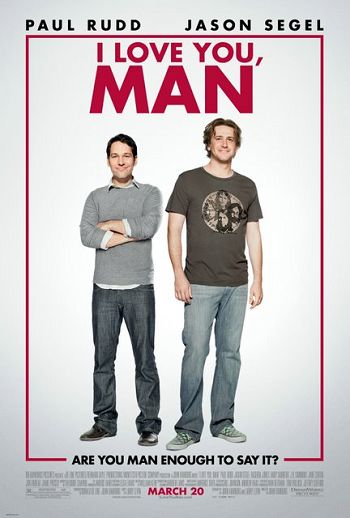 I Love You, Man

I Love You, Man is brilliant in its simplicity.  It is basically a formula romantic comedy in which there is no actual romance.

In the new hipster lingo, I Love You, Man is a “bromance,” but even that is overselling it.  It simply looks at the difficulty for grown men making new friends and then twists it to fit into the traditional format of a love story.

I Love You, Man reunites two of the co-stars of last year’s also pretty perfect romantic comedy Forgetting Sarah Marshall – Paul Rudd and Jason Segel (though Rudd was in more of a supporting role in Sarah Marshall.)  From the evidence of those films the pair show the potential to be a Matthau and Lemmon for the new millennium.  Both actors are regulars of the Judd Apatow comic film factory – both had also been in Knocked Up (though to my recollection they did not share any scenes), Rudd was in The Forty-Year Old Virgin and Segel was in Apatow’s acclaimed TV series Freaks and Geeks and Undeclared.

However, while I Love You, Man certainly has the moves of an Apatow vehicle, it is actually made outside of Apatow’s influence.  Co-writer and director John Hamburg was previously best known for making much inferior Ben Stiller projects (including Along Came Polly, Meet the Parents, Meet the Fockers and Zoolander), however he seems to have picked up a thing or two from the Apatow school of comedy.

Being unchained from Stiller seems to have done wonders for Hamburg, who writes and directs with a much lighter touch than his hyperactive collaborator tended to allow.  This is by far Hamburg’s funniest, smartest work to date.

Perhaps his smartest move was finally handing the reigns to Rudd, who usually gets relegated to slightly smaller best friend and in-law roles.  Between this film and the recent Role Models, Rudd has staked a claim as a terrifically self-deprecating leading man.  Despite his handsome and likable demeanor, Rudd is more than happy to let himself look silly, which fits this role to a T.

Rudd plays Peter Klaven, a sort of metro-sexual real estate broker.  Peter is a woman’s man, he feels at home with women drinking wine and watching French films on premium cable.  However, he’s always been so involved with his romances that he has never really made any male friends.

When he is ready to get married, he suddenly realizes he has no friends to be in his wedding party.  He overhears his fiancée (Rashida Jones from The Office) being warned by her friends that there is something wrong with a guy who has no real friends.  Therefore, he must make some friends and fast.  He goes to his father (the great JK Simmons) and his brother (Andy Samberg of Saturday Night Live) – who is gay but much more butch than Peter – for help in meeting guys.

This problem may be overplayed a bit – after all, all he really must do is ask his brother to be best man – but okay, we’ll allow the movie its conceit.

Eventually, after some disastrous and funny misfires, he meets Sydney Fife (Segel), a classic guy’s guy who dates divorces, worships the band Rush and lives in a man’s wonderland.  They bond, but it leads to some of the typical rom-com complications and misunderstandings.

If it all sounds a little silly, it isn’t.  It’s one of the funniest films of the year.