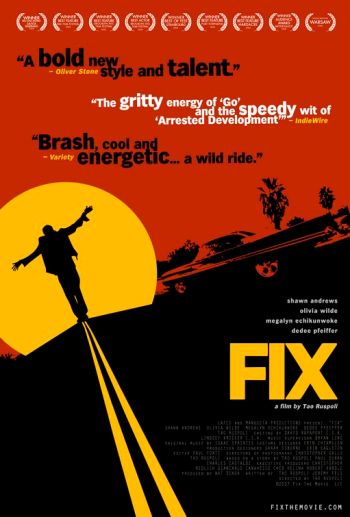 In Tao Ruspoli’s Fix, a smart-but-naïve liberal documentary filmmaker and his hot progressive girlfriend have a day to enroll his brother in rehab to save him from being thrown in jail.  With the brother in tow, they cover some of the most (and least) scenic sections of Los Angeles’ underworld in order to scrape up enough money to pay for the rehab facility.

This mission may be more of a moral dilemma for the audience if not for the fact that every single thing that the brother says or does leads to a pretty inescapable conclusion – yeah, the guy really should be in jail.

Rehab would be wasted on him.  He is an unrepentant drug user – we see him apparently high several times in the film and actually watch him shooting up once.  So you know that he is interested in rehab to avoid jail, not to help kick the habit.  Besides, despite the fact that he is occasionally marginally charming, the guy quite simply is a criminal.

For example, just a few of his little scams to pay for rehab include hitting up a producer’s estranged wife, selling stolen cars, stealing an espresso machine, trying to sell a boxer mutt as a thoroughbred, and eventually trying to unload a pound of medical grade marijuana.

Selling marijuana to pay for rehab – just because it is ironic doesn’t necessarily make it funny.

And this guy is our hero…

Well, sort of, anyway.  Perhaps our hero is supposed to be the man behind the camera – though we rarely see him on film.  (Yes, this is another one of those pseudo-documentary films where a character spends most of the film capturing everything with a handheld camera).  However, Milo – the filmmaker (played by co-writer/director Ruspoli) seems to care much more about getting his brother Leo (played with some hipster charm and massive self-pity by Shawn Andrews) into rehab than Leo does.

Milo drags in his big-hearted (and very attractive) girlfriend Bella, played by Maxim magazine’s 2009 number one hottie Olivia Wilde of The OC and House.  In case you are wondering what exactly Olivia Wilde is doing in a relatively thankless role in this tiny indie project, it can probably be answered with one brief statement of fact: she is married to writer/director Ruspoli.

Milo convinces Bella to come along because they are making a movie on crime and how it affects and seduces the poor.  Apparently for a couple who is making a film about crime, neither of them really knows any criminals.  Bella hates Milo at first – for good reason, he is an asshole and a con man.  However, eventually Bella seems to soften to him for reasons that make no real sense other than Ruspoli wants her – and by extension the audience – to find Leo to be a lovably tragic figure.

Of course, the street life here is just a tiny bit quirky for the film’s indie cred – hence the theft of the espresso maker and the dog.  Seriously, there is a scene where a hardened gangsta brags about how he is living the street life dream while he is playing dominoes on a project bench.  Plus, Milo is told threateningly at least a dozen times by criminals, lawyers and cops to turn the camera off – and not one of them makes another peep when he simply doesn’t.  We’re not exactly talking The Wire here.

In the end, I don’t think that Ruspoli – who apparently based this film on experiences he has had with his own brother – quite realizes how utterly unlikable his addict antihero is.  Ruspoli is trying to portray Leo as an affable loser, however the description that comes to mind much more readily is that he is an asshole.

The film’s final shot, which is intended to be a sad reminder of the unpredictability of life with an addict, was actually rather inevitable with this selfish character.  Without that expected big emotional payoff, Fix sort of feels like it was treading water for 90 minutes – stylish, but ultimately empty.