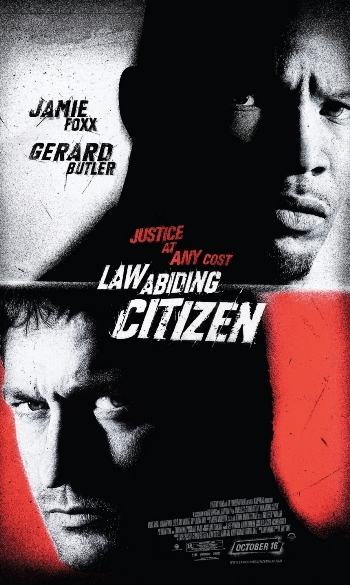 Since totally breaking through in 2004 with the acclaimed duo of films Collateral and Ray, Jamie Foxx has been very hit or miss on his filmmaking choices. It appears that he plans to make every other film a quality “prestige” role and then he will follow it up with some cheesy exploitation film. Problem is, in the last few years even the planned quality roles – such as The Soloist and The Kingdom – haven’t been all that good. And as for the bad… well, do I have to say anything more than to mention Stealth?

It’s almost like in the last few years Foxx is putting more effort into his music career than he is doing in his day job film career. Of course, if that is the case, he may want to have a long talk with Jennifer Lopez, who also made a slew of crummy movies while focusing on her music career – only to find that her real talent as an actress was pretty much dead in the water by the time her music career inevitably ran its course a few years down the line.

Which brings us to Law Abiding Citizen – Foxx’s latest slumming movie. It is not Foxx’s worst film (again, I point out Stealth), however it may just be the actor’s worst performance. Or non-performance. It’s rather shocking how completely detached from his character and the story that Foxx appears throughout this film. It’s almost like he thinks he’s Eddie Murphy or something. Foxx seems to be annoyed even to be there.

Not that there is much reason to be invested in Law Abiding Citizen, which tries to ramp up the old Death Wish scenario for the new millennium (which had already been done with Death Sentence and The Brave One) and completely botches it.

Gerard Butler plays Clyde – a Philadelphia inventor who is the victim of a violent home invasion in which he is forced to watch his wife raped and murdered and daughter killed by two Hell’s Angels types. Clyde survives his own stab wounds but is figuratively gashed all over again when a hot-shot Philly prosecuting attorney named Nick (Foxx) decided to plead out the case when one of the bad guys agrees to testify against the other.

Of course, it seems a little odd that this deal would be made when the only witness of the crime insists that the guy getting the cushy short sentence was the actual murderer – however otherwise there would be no movie.

Therefore, Clyde decides not to get mad, but get even – taking a shadowy government job as the creator of covert assassination methods and biding his time for a decade while he plots to do away with the two criminals as well as the lawyers and policemen who let them get away.

The problem is, it is taken way too far. Clyde eventually turns out to be way more bloodthirsty and twisted than even the criminals that originally made him a victim. Any sympathy you may have felt for him early on quickly evaporates. Also, by changing Clyde into a super-villain, creating horrifyingly violent death and mayhem – often from behind bars – is in direct contrast to the pleasant family man we are introduced to in the early scenes. Yes, of course he would become exceedingly bitter and want some justice and revenge – but the crime seems to have made Clyde to be seriously twisted.

However, as completely delusional as Clyde may be, he is correct in the fact that Nick was completely inadequate as the prosecuting attorney, putting politics and his own career before carrying out justice – which was supposed to be his job.

Therefore, Law Abiding Citizen has a huge vacuum where the hero is supposed to be. You cannot root for either character.

Since one or the other is on screen almost the entire length of the movie, the audience is put in the uncomfortable position of watching a war of wits between two people, neither of whom we want to win.

I also have to say, as a Philadelphia native, that I have never seen a movie that makes my beautiful hometown look more like a dump – and there have many films made here. Philly looks dirty, dingy and scary in the film, which is only a small part of the rich tapestry of the city. I know it is supposed to be skewed as a thriller setting, however Philadelphia Mayor Michael Nutter – who does a silent cameo here as a man who holds the bible as the film mayor swears the new DA into office – should insist upon an apology from the filmmakers.