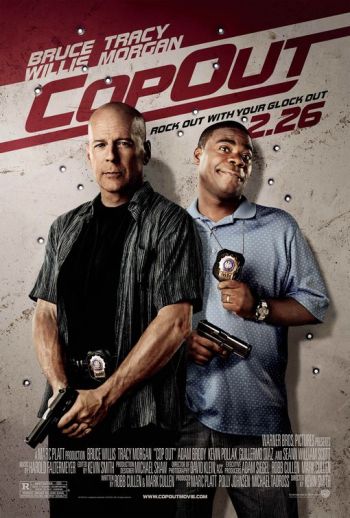 A Kevin Smith movie is always a production.  It has the auteur’s unmistakable narrative voice, a smart and with it ear for dialogue, a regular revolving-door troupe of favorite actors, a fascination with the obscene and unfortunately, in recent years, a huge sappiness streak.

That’s why I was surprised to suddenly hear that a buddy cop movie for which I’d been seeing ads for weeks was actually a Kevin Smith movie which had pretty much flown under the radar.  Then I was shocked to see that he was merely the director.  He had not written the film’s screenplay.

Cop Out is Smith’s attempt to show that he can succeed as a gun-for-hire studio director and I’ve got to tell you Kevin, you really can’t.  You were never a good director.  Your writing skills always saved your work from total mediocrity.  Your awkward direction has been sabotaging your work going back to your brilliant debut film Clerks.  (At least back then you could argue that the film was made on such a low budget that it was inevitable that little problems would arise.)

More to the point – a Kevin Smith movie without a Kevin Smith screenplay is completely superfluous.  Anyone could have directed Cop Out – and even though the source material was pretty weak to start with, just about any serious director could have probably made it look more interesting and feel less generic than it is.

There are a few little glimmers of Smith’s style – though he does not get a screenwriting credit, I would guess that some of the topical and scatological references peppered throughout the screenplay came from the imagination of the director.  (Also, the director’s good friend Jason Lee stops by for a really inessential cameo.)

Beyond being Smith’s unsuccessful coming out party as a director, the film also fails in its attempt to rejuvenate the old buddy cop genre.  You remember those – two very different cops, one played by a serious tough guy actor, the other by a comedian, track down super dangerous criminals in a film which was as thrilling as it was funny.  There were many of these films that were acclaimed in the 80s, including 48 Hrs., Beverly Hills Cop, Stakeout, Lethal Weapon, Running Scared and Fletch.  (Though technically in Fletch – a film which Smith has wanted to remake for years, by the way – the main character was both the tough guy and the comic relief.)

However, just because there were so many of these films made successfully – that does not mean they are easy to make.  No, the buddy cop film has to tread a fine line, being as interesting as an adventure as it is as a comedy.  Truth is, Beverly Hills Cop was not even written as a comedy – it was supposed to be a drama with Sylvester Stallone – it was only when Eddie Murphy came on board did it become funny.

In the Eddie Murphy role here is Tracy Morgan.  Morgan can be funny in small doses (see: 30 Rock).  However, he becomes annoying as hell with extended exposure (see: pretty much everything else he ever has done.)  Here he is so busy riffing that you never buy him as a cop for a second.  In the old films, the characters were always cops first and funny second – you never doubted their skills.

Bruce Willis plays the tough guy – for about the 500th time in his career – and he is obviously phoning it in.  (Then again, what film has Willis made in the last decade or so that he wasn’t obviously phoning in?)  He is divorced, his ex-wife hates him, his daughter is getting married and he can’t afford to pay for the reception.  Therefore, he decides to sell a vintage baseball card to pay things off.  Unfortunately it is stolen in a robbery while he is trying to sell it – all of which leads to a convoluted story about a Mexican drug cartel, a sport-memorabilia loving dealer, a kidnapped Mexican woman and two fellow cops who want to show the heroes up.  We also have the absolutely inevitable scene where the chief chews them out and takes their badges.

All of these ideas are pale imitations of the original films (though I’m not sure where the baseball card thing came from.)  The laughs, mostly provided by Morgan and Seann William Scott in the Joe Pesci role of annoying con, inevitably fall flat.

The one thing the movie did nail from those 80s buddy cop movies was hiring Harold Faltermeyer, the man behind the bouncy musical scores for the likes of Beverly Hills Cop and Fletch.

Trust me, you are much better off tracking down those two films, where the score is attached to a more interesting movie.