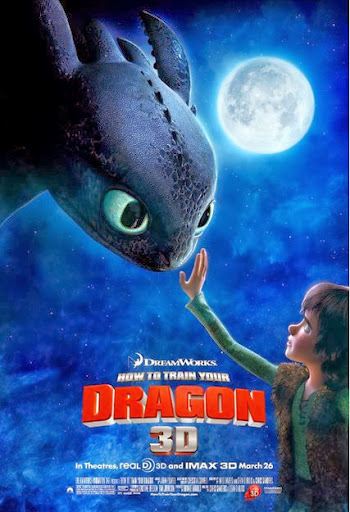 How to Train Your Dragon

Screenplay by Will Davies, Chris Sanders and Dean DeBlois.

The recipe for a modern computer-animated film seems to be rather simple.  Take one misunderstood outcast.  Put him (or her) in an unusual circumstance in a far-off time or place that is part realism/part fantasy.  Make sure his parent is an authority figure of some sort.  Give him some funny loser friends, a wacky boss and a crush on a cute member of the opposite sex who barely notices him.  Then introduce him to a new best friend – someone or thing that looks to be fearsome, but is actually a sweet and gentle soul.  Sprinkle with a feel-good message about tolerance of those that are different than us.  Mix in several comic set pieces and some spectacular looking action sequences before settling in for the inevitable showdown with unspeakable evil – which shows up all too often in the movies in the form of a giant dragon.  (At least here we are warned about the inevitable super-dragon showdown in the title.)  Stir well and serve to the hungry masses at the multiplexes.

How to Train Your Dragon is hardly an original film, but that does not mean it is not an enjoyable film.  In fact, before the overblown action climax, Dragon is one of the better of the recent CGI extravaganzas.  Dreamworks – which is the studio behind this film, Kung Fu Panda, Monsters vs. Aliens and the Shrek movies – still has not reached the Pixar gold standard, but they are certainly bringing more to the table than crass stuff like Planet 51 and Cloudy with a Chance of Meatballs.

Actually, with Dragon the studio is apparently slipping into Pixar’s story model.  The earlier Dreamworks films (as well as others from the studio like Madagascar, A Shark Tale and Bee Movie) tended to stock up on snarky humor at the expense of story.

While there are certainly funny parts to this film, it seems more interested in putting together a plot, characters and visual majesty.  While they don’t always hit pay dirt on the characters, the storyline is nicely layered (before the overwrought last 20 or so minutes) and much of the action is stunningly beautiful.  How to Train Your Dragon is also one of the rare animated films that actually benefits from 3D – the dragon flights here are almost as impressive as the similar effects in Avatar.

Our hero is called Hiccup (yes, that’s really supposed to be his name, I couldn’t make that one up), a young Viking who obsesses about killing a dragon, because his father is the mayor of the town and the greatest dragon hunter in the land.  Dad is embarrassed by his nerdy son, so during a massive dragon attack, Hiccup shoots off a homemade weapon and ends up injuring a huge black night flier.

Hiccup tracks down the dragon but can’t bring himself to kill the being, seeing his soulful eyes.  Soon, the dragon becomes like a huge pet for Hiccup.  In fact, the characterization of the dragon is one of the nicest flights of fancy in this charming film – who knew that dragons are apparently flying and fire-breathing overgrown pussy cats?  Soon Hiccup is rubbing the dragon (whom he has named Toothless, because his teeth only appear when he is ready to attack) on the belly, playing fetch with him, bringing him fish and figuring out how to build an artificial section of his tail so that Toothless can learn to fly.

When his dad signs Hiccup up for dragon-hunting class, the boy shows himself to be able to subdue the fearsome beasts without killing them.  Soon word of his abilities spread as Hiccup tries to broker a kind of peace between human and dragon – a detente which is eventually destroyed by his own father.

That, of course and unnecessarily, leads to the overstuffed and rather ordinary climax, but the true reason to see How to Train Your Dragon is the more subtle and deeper-felt lead up.  This is ¾ of a very good movie – I just wish the filmmakers hadn’t given in to their more pedestrian impulses.