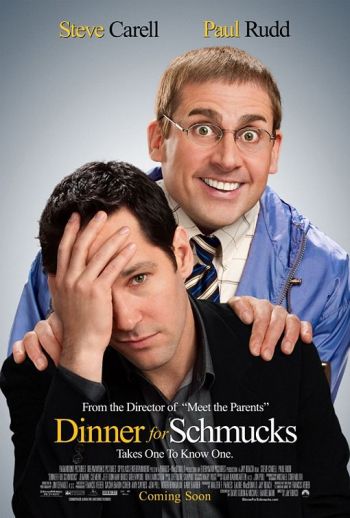 It is interesting that Dinner for Schmucks would use a Yiddish insult in its title and then not have the balls to actually use the term in its screenplay.  In the movie, it is usually referred to with the much less interesting terms “dinner for idiots” or “dinner for losers.”

However, the real schmucks here are the poor audience members who get seduced by a strong comic cast – including Paul Rudd, Steve Carell and Zach Galifianakis – and have to sit through this ridiculous piece of garbage.

Dinner for Schmucks is based loosely on a slightly better French farce called Le Diner de Cons (The Dinner Party).  It is directed by scattershot director Jay Roach who has made some good movies (Austin Powers: International Man of Mystery and the terrific HBO docudrama Recount: The Story of the 2000 Election) but more often makes overrated junk (the other two Austin Powers movies and the first two Meet the Parents films).

Dinner for Schmucks, surprisingly, is just as bad as he has done.

First of all, it is based on a really pretty obnoxious premise – a snooty, pretentious idea.  A bunch of rich and privileged businessmen have a soiree in which each is asked to invite a total loser for the group to mock mercilessly.

However, the movie can’t even have the courage of its own convictions.  In the French original the main character is a jerk who enjoys the whole idea of mocking less fortunate people with his friends.  Dinner for Schmucks can’t bear to have an asshole as its central figure.  Therefore the movie pulls its punches – making Barry (Rudd) a reluctant participant who feels guilty about going, but sees the party as a way to get a big promotion.  Barry doesn’t even want the promotion for himself – he wants it to impress his hot art curator girlfriend (Stephanie Szostak) – despite the fact that she is not overly money-hungry and goes out of her way to show how much she finds the party idea repugnant.

Barry literally runs into this schmuck (oh, sorry, idiot), hitting a goofy-looking guy named Tim (Carell) with his car in a busy Los Angeles street.  It turns out, despite a bone-rattling collision (internal bleeding is funny, dude) the guy is more worried about getting a dead mouse from the road than, you know, getting to the hospital.  Tim explains that he uses the dead mice for his own art work – little dioramas in which taxidermied mice are dressed up and put in little miniaturized scenes.

Now for all of the many, many reasons that Tim should be mocked, his little art works is not one of them.  While, I certainly agree that the idea of using dead mice in art is odd, the little tableaus that the guy has supposedly put together are really rather whimsically charming and spectacularly detailed.  The guy may have a weird palette, but even a stuck-up asshole would have to admit that he is quite obviously a very talented artist.

However, he is also annoyingly, unrealistically, stupid and immature.  Just because Carell is stealing Jerry Lewis’ haircut and buckteeth doesn’t mean that he should be playing a Jerry Lewis character.  Comedy that broad and that stupid could fly fifty years ago – now it is just sad.  Carell tries hard to be a team player and do his best wring laughs from the absolutely absurd actions that his character is constantly doing.  It is a lot of effort completely wasted.

Then, finally, Barry comes to see Tim’s good side – even though the audience is still looking for it – simply because the film has to pull another punch for a happy ending.

Rudd, Zach Galifianakis and Jemaine Clement (as a horribly pretentious Eurotrash artist) try their damnedest to drum some life into the absurdities on display, but it is all for naught.

Maybe in the interest of truth in advertising, they should change the title.  It really should be called Movie for Schmucks.