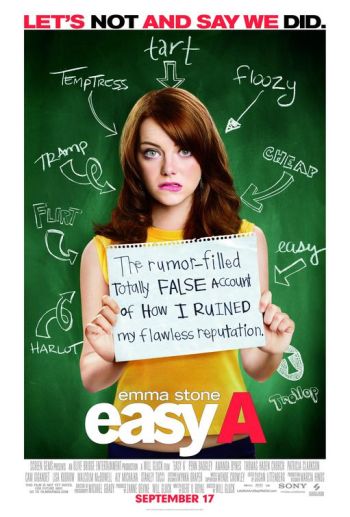 Directed by Will Gluck.

Emma Stone has done her hard time in the trenches of the movie world, lending her offbeat charm to supporting roles in films that were good (Superbad, Zombieland, The House Bunny) and not so good (Ghosts of Girlfriends Past, The Rocker).  She was even one of the better parts of a short-lived and barely-seen FOX action series Drive.

Therefore it’s nice to see that she is finally getting the chance to drive her own vehicle, so to speak.

Easy A isn’t a perfect movie, but it’s a very likable one and that is mostly thanks to the innate charm of its leading lady.

Stone plays Olive, an Ojai, California high school student who, despite the fact that she is completely adorable, is completely invisible in her school.  (She suggests in the clever voiceover narration that Google Earth wouldn’t notice her if she was disguised as a ten-story building.)

Her social standing is immediately magnified due to one little white lie.  In order to get out of a camping trip with her best friend Rhi (Aly Michalka of the pop group Aly & AJ) and her oddball family, she makes up a date with a fictional college student named George.  (Side note: forty years ago in The Brady Bunch, Jan Brady made up a fake boyfriend – and his name was also George.  Is this a coincidence?  Discuss…)

When Rhi gets back the next weekend, she is suddenly certain that Olive had sex with George.  After hounding her to give her the details, Olive finally tires of being the goody-goody virgin and gives her friend a private account of her imaginary deflowering.  Only it was not quite as private as she thought.  It was overheard by Marianne (Amanda Bynes), the local religious and abstinence leader and apparently a first class gossip.

By the next period, Olive’s reputation – and her standing – has changed forever at her school.

Interestingly, Olive finds that the notoriety of being the local slut is somewhat liberating.  Suddenly she is cooler and more popular than she ever had been.  So when a local closeted gay boy (Dan Byrd of Cougar Town) asks her to fake having slept with him so that everyone will stop picking on him as gay, her heart goes out to him and she very vocally fakes an affair with him at a party.

This quickly becomes a profitable side-light for Olive, loser boys pay her to pretend that she slept with them, helping their reputation and her new-found notoriety.

Hmmm, wonder how this could go wrong?

Easy A has a light and breezy style of the 1980s teen comedies of John Hughes and Cameron Crowe (in fact, several of these movies are name-checked or have excerpts shown in the film, including … Say Anything, Ferris Bueller’s Day Off and Sixteen Candles.).

The script (by playwright Bert V. Royal) also has a wonderful self-awareness, with Olive mocking the plotting coincidence that she is supposed to be reading Nathaniel Hawthorne’s The Scarlet Letter at just the moment in her high school career that it would be most pertinent to her life – and she gives a hilarious dissection of the Demi Moore movie version of the book.

Easy A is directed by former sitcom creator Will Gluck (The Loop) in what is his second straight film which overcomes in quality its somewhat cheesy basic story idea.  (The last one was the surprisingly sharp cheerleader camp comedy Fired Up!)

Stone is surrounded by a very fine cast – Stanley Tucci and Patricia Clarkson as her just a hair too understanding parents, Malcolm McDowell as the hard-ass principal, Thomas Haden Church as her favorite teacher and Lisa Kudrow as his wife, the guidance counselor.

However, even amongst all this talent Emma Stone shines brightly.  If this is not a star-making performance, there is no justice.