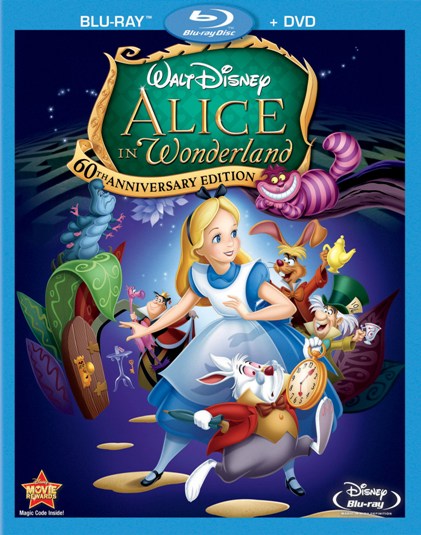 A true Disney favorite – Alice in Wonderland 60th Anniversary Edition – is being released February 1, 2011 in a Disney Blu-Ray & DVD pack.  Once again, you can enjoy the timeless story that has captured the hearts of generations, but this time in the brilliance of high definition perfection.  It hard to believe you are actually watching a 1951 animated classic because the restoration is just that good.

Get to know all of your favorite characters again, including Alice, the Mad Hatter, the Cheshire Cat and the Queen of Hearts, while watching Alice venture through the wacky world of Wonderland with lots of fun and crazy adventures.

The 2-disc combo pack offers tons of extras in both DVD and Blue-Ray.  The DVD offers a deleted scene – “Pig and Pepper” and “Virtual Wonderland Party” interactive game.   The BluRay boasts even more extras including “Through the Keyhole,” “A Guide to Wonderland,” “Painting the Roses” Interactive Game, “Pencil Test: Alice Shrinks,” “Reflections on Alice” Featurette, “Operation Alice” in High Definition and much more!

The 2011 release of this classic is taken to new lengths and is a real treat!  Vibrant colors, crystal clear sounds, flawless picture quality and pure animation perfection!  Alice in Wonderful 60th Anniversary Edition reminds you why Disney is Disney, and just what they do best.  This new digitally edited version is a gift for many generations to come, Disney fans and collectors alike!