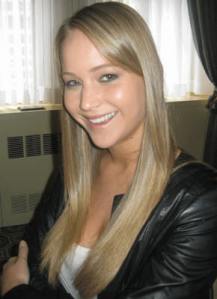 Jennifer Lawrence at the NY press day for “Winter’s Bone.”

Thanks to her 2011 Oscar™ nom for Best Actress as Ree Dolly in Winter’s Bone, relative newcomer Jennifer Lawrence has now become one of Hollywood’s latest darlings. Of course, there are the perks of such attention: fancy gowns, cool parties, cute guys and lots of media attention – including having interviewers (like this one) pop hopefully clever questions. But what a burden. There’s that downside of such accolades – the sophomore slump – what’s up with that?

Telling Ree’s tale, the film details a dirt-poor Missouri Ozarks meth plagued community in which the 17-year-old holds her siblings together thanks to a drug-dealing absent father and mentally ill mother. When she’s told they risk losing their house since her missing dad had put it for collateral to get bail after a drug bust, she searches for him amongst a dangerous crew of dealers and their associates including her addled uncle Teardrop (Oscar nominee John Hawkes) who thinks his brother has been killed.

Debra Granik’s directorial turn has won kudos for all involved. And in the very male-centric world of mainstream movies, here’s an indie developed by women structured around a strongly female perspective, featuring a woman who succeeds in a world where the men are domineering losers. In turn, the tall, willowy Louisville, Kentucky, native parlayed experience through a subtle performance in the under-appreciated The Burning Plain into her break-out performance in Winter’s Bone.

Released in early 2010, the film won the Grand Jury Prize at the Sundance Film Festival and earned Lawrence other awards or nominations for Best Actress at the Gotham Awards, Golden Globes and SAG.

The 20-year-old now has several other features set for release in 2011, including the Jodie Foster-directed film The Beaver, in which she co-stars with Foster, Mel Gibson and Anton Yelchin, as well as X-Men: First Class and House at the End of the Street.

She has appeared in two Sundance Grand Jury Prize winners in a row – last year’s Winter’s Bone and this year’s Like Crazy. She is also the second youngest Oscar nominee for Best Actress in a Leading Role (after Keisha Castle-Hughes, who was younger when nominated for Whale Rider in 2002).

How did you get involved with Winter’s Bone? Did you audition or meet specifically with Debra about you being in that role?

No, I had to fight for it. I auditioned for it three times.

Who were you up against?

I think everybody. I auditioned twice in LA and then they said I was too pretty. So I took the redeye – which, just for the record, will take care of that – and flew to New York like a psycho and showed up to the New York auditions with icicles in my hair and was like “Hi! I’m back!” I think that once they saw that I had the exact kind of stubbornness and competitiveness that Ree has, they were like “Oh, well, nobody else is going to be this stubborn and this crazy to embark on such a journey.”

Did you find a link to the movie through your Kentucky roots?

There were some things, there were some sayings that I was familiar with. I am familiar with the very close family and the hierarchy of the family. But my life is very different from that of the Ozarks that’s portrayed in the movie.

What was it like shooting there in Missouri and the Ozarks?

There were no sets on the whole movie. Everything was real and we spent a lot of time with the family whose property we were shooting on, the Laysons. I went up a week before we started filming and spent a lot of time with them, and that’s how Ashlee, who plays my little sister in the movie, was cast – because she lives there. That’s her house. We became so close that we thought why would we cast this when it’s right here? In the book I have two little brothers, but we changed it to Ashlee.

What did she think about the experience of being in a movie?

I don’t think she liked it. She had fun because we thought of it as make believe, but she didn’t like the camera, which I thought was awesome. I was like, you’re going to be cool when you grow up. Because when I was a kid I was like, where’s the camera? So I’m always fascinated with little kids who are shy. I always think they’re going to be way cooler than I could ever be.