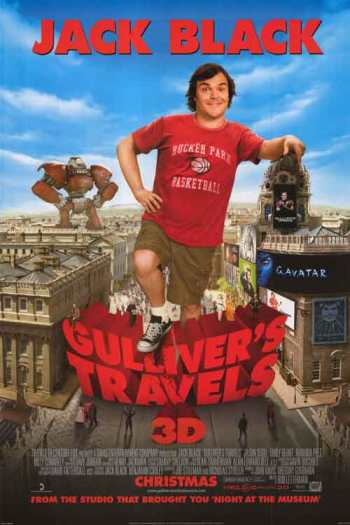 If you read Jonathan Swift’s classic parable Gulliver’s Travels while growing up, chances are you will find very little that you recognize of that tale in this new film, which shares the book’s title and basic premise and not much else.

Unless I’m forgetting the chapters that Swift wrote about the giant robots, theatrical staging of scenes from Star Wars, the sing-along version of Edwin Starr’s “War” and the novel approach of dousing a raging fire with urine.

This is classic children’s literature being dumbed down to incoherence.  If this is what we need to do to make Gulliver’s Travels palatable to the kids of today, then there is probably no real reason to continue telling the story.  I’d rather never have children hear of the world of Lilliput than have them think that is was like this.

In the newfangled Travels, Gulliver is an overweight loser (played by Jack Black, who is typecast in that role by now) working at the mail room at a local newspaper.  He is harboring an unrequited crush on the gorgeous and sweet editor at the paper (another career pit stop for Amanda Peet, who once upon a time looked like a pretty comedienne to watch).  For some reason she likes the big galoot, too, and when he lies and says he is a writer, she allows him to try out for the travel section.

Since he can’t really write, he copies some stuff from Berlitz and hopes she won’t notice.  (There is a strange and disturbing little recurring undercurrent in which Gulliver’s Travels seems to be condoning and – even kind of recommending – plagiarism.)

She is so impressed that she sends him to do a story about the Bermuda Triangle.

You see what is coming, don’t you?

Gulliver is in a shipwreck.  He wakes up on a tiny island, populated by people the size of his fingernails.

Despite the fact that he is large enough to swat away armies of the Lilliputian men, he is soon captured and held prisoner.  He eventually wins them over through derring-do and bad sophomoric humor, essentially becoming the hero of Lilliput and transforming this magical kingdom into a version of Times Square, dedicated to him.

Of course there is a bad guy there trying to show him up – and he isn’t above throwing in with the Lilliputian’s mortal enemies to do it.

However, Gulliver befriends a young Lilliputian (Jason Segel, completely wasted in the role) who was also jailed, because of his courtly love for the princess of Lilliput (Emily Blunt is scary bad here, like she can’t believe that she somehow was talked into doing this film and thus she refuses to commit to the character at all).

This leads to stupid battle scenes, the beloved travel editor somehow washing up on the same island, and way too many scenes of Black with his shirt off.

Really, the estate of Jonathan Swift should be suing the makers of this film for what they have done to their ancestor’s work.