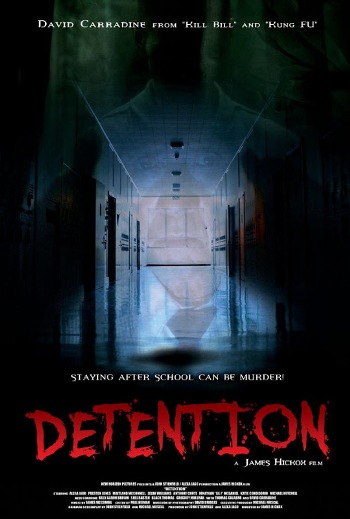 Detention certainly is not the world’s most unique film – in fact the idea of the sins of the parents being paid off by the innocent children is pretty much a staple of the horror genre.  Still, in its own offbeat, cheesy way, the movie isn’t all that bad as low-budget scare machines go.

Detention has no intentions of ever being anything other than a late night cable staple, and on that level it kind of succeeds.  I can’t really say that it is good because the film has quite a few problems just as a film, but if you take it for what it is – a b-movie shocker – it kind of works and has some interesting twists and turns.

In fact, the movie plays out like some sort of bizarre mash-up of The Breakfast Club and A Nightmare on Elm Street.

As horror films apparently inevitably do, Detention starts out in a flashback to the early 1980s.  A group of high school students have broken into the school in the middle of the night when a mean-spirited prank ends up going horribly awry and one student is accidentally set ablaze in the school incinerator.  (The special effects for this fire – and a few other spooky scenes as the film goes on – are almost laughably low-tech.)

Flash forward to the present day.  A bunch of kids are held for detention at the school, thirty years to the day after the death of the kid.  Suddenly, the worst rain storm in years – since that very night, actually – knocks out the power.  Kids start seeing and hearing things out in the halls.  Then suddenly people start dying.

And, small world, it turns out that all the kids in detention are the children of the pranksters in the flashback.  Didn’t see that coming.

Cheesy stuff, yes.  And many of the teen characters are kind of unlikely and unlikable – despite all being spectacularly attractive.

Like The Breakfast Club, you have the whole cross-section of people.  The popular girl, the jock, the gangsta, the nerd, the rich girl, the hot emo chick, and oddly what seems to be an autistic savant.  Plus there is the tough-assed coach and principal who are running the detention.

And what’s the deal with that mysterious new teacher who seems abnormally interested in the tragic story?

It’s all standard fare and pretty hokily filmed, and yet in some dumb primal ways it rather works in parts.  The young cast is mostly not bad – with Maitland McConnell and Billy Aaron Brown kinda standing out.

The scares themselves are obviously done on the cheap, the special effects don’t always work, but some of the suspense scenes are very tense.

Detention can’t always seem to decide on its own supernatural ideas – for example a character who is supposed to be a ghost is eventually fought with and electrocuted, and it hurts and perhaps kills them like a living being, not as a spirit would.

Then again, you don’t go into a B horror film expecting narrative clarity.

This movie has obviously taken a while to find release – it features one of the final performances by David (Kung Fu) Carradine, who has been dead now for almost two years.  Carradine is pretty much the only actor you are likely to recognize here, except perhaps for Thomas Calabro as the coach and one other regular character actor whose name I couldn’t place but I’ve definitely seen around.  He plays a school janitor who is given the dangerous job of removing the incinerator from the basement. (An IMDb check tells me his name is John Capodice.)

Detention won’t change anyone’s life, but if it comes on Showtime at four in the morning and you can’t sleep, there are worse ways to pass the time.