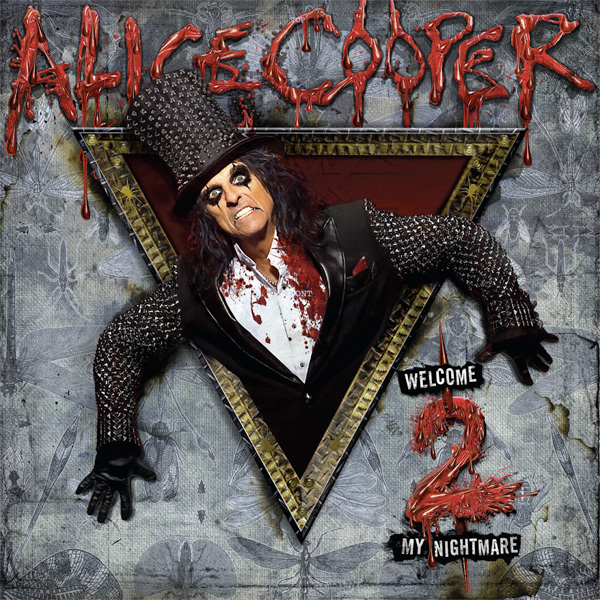 It has been over 35 years since Alice Cooper released his legendary first solo album Welcome To My Nightmare.  (Though, technically, lots of people didn’t know it was a solo debut since his longtime band, which had recorded seven albums, was also named Alice Cooper.)  It was a multi-platinum album and considered one of the great works of early hard rock.

But has anyone really been waiting in 2011 for a sequel to that album?  Particularly since Cooper’s last hit, “Poison,” was released way back in 1989 (and even at the time was considered a comeback surge for a long-dormant career.)  His last album, the independent 2008 release Along Came A Spider, barely made a ripple in the pop culture consciousness when it was released.  Let’s face it, Alice Cooper is better known as a celeb golfer and occasional conservative pundit than he is as a singer anymore.

However, Welcome To My Nightmare was a truly special work in the rock annals – the concept album as a horror movie – and spawned one of Cooper’s most gorgeous hits (“Only Women Bleed”) as well as the highly theatrical title track and one of the most visually captivating rock tours in history.

If Welcome 2 My Nightmare comes close to living up to its (sorta) namesake then it is cause for celebration.  Of course, if it doesn’t, it can just harm the reputation of an acknowledged classic (Bat Out of Hell II and III, anyone?)

The pleasant surprise is that Welcome 2 My Nightmare is far better than most people would expect.  Cooper reunites with the producer and many of the musicians who worked on the original concept album and comes out with an record that not only recaptures the sound of 1975, it actually sounds like it was made in 1975.

Of course, that has it’s own built in benefits and drawbacks.  Cooper makes few concessions to modern musical styles, therefore it may be a little hard for the album to find an audience beyond his current older fans.  Then again, what really were the chances that the kids were going to look for an Alice Cooper album, anyway?

Again, Welcome 2 My Nightmare attempts to be the aural equivalent of a chiller and it mostly succeeds, mixing styles and subjects with panache.  Cooper is best known for his balls to the wall rock and he gives that, but also slips in little bits of alt, country, pop, cabaret and even a bit of funk.

And honestly, though some hardcore fans will find this sacrilege, I personally think perhaps Cooper’s finest talent was as a balladeer.  Back in the day, his streak of “Only Women Bleed,” “I Never Cry” and “You & Me” was one of the great runs of introspective mellow brilliance in hard rock circles.  The new ballad “Something To Remember Me By” is deserving of a mention with those songs – and that is high praise indeed.

Probably the song with the best chance to catch on is “What Baby Wants,” the duet with pop princess Ke$ha, but it is honestly one of the weaker cuts here.  I’d much prefer to hear the lovely “I Am Made of You” or the straight ahead rock drive of “Caffeine” or the ethereal “The Nightmare Returns” or even the Tom-Waits-wannabe “Last Man on Earth” catching on.

In some ways, Welcome 2 My Nightmare is a cynical piece of product, but it is also the best work that Alice Cooper has done in decades.  I don’t know for sure how relevant this music is anymore, but if you love 70s glam shock rock, Welcome 2 will be a welcome jolt back in time.