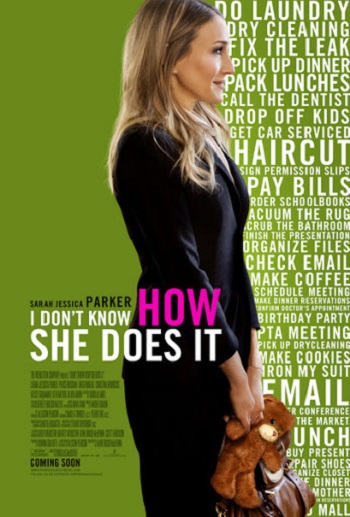 I Don’t Know How She Does It

The title to the movie I Don’t Know How She Does It refers to the great hardship of a married woman juggling career, romance and motherhood.  Of course, it isn’t 1975 anymore, so that isn’t exactly the most novel problem in the world during the new millennium.  It seems to me like there may be more than a few women out there who have it even harder in life than the pampered and privileged lead character here has.  Just saying…

After all, at one point she suggests that being both a mother and having a stressful job has made her unable to do such vital me things as go to the movies and bowl.  Suggestion: Take the kids with you bowling.  Problem solved.  As far as movies, if they are as bad as this one, perhaps she is better off missing out.

Still, fine, I suppose it’s okay if someone wants to make a movie deifying working mothers.  It is a difficult way of life.  There certainly will be an appreciative audience that will chuckle and cluck in recognition about things like bake sales and business meetings.

To me, though, the film’s title has a totally different meaning.  I don’t know how Sarah Jessica Parker makes every movie she is in anymore damned near excruciating to watch.

I had always liked Parker – going back to her wonderful 80s sitcom Square Pegs and through an up-and-down, but mostly enjoyable movie and television career that did spawn such pearls as LA Story, State & Main, Ed Wood and Honeymoon in Vegas.  I was also a big fan of Sex and the City – though I will admit that it went on about a season and a half longer than it should have.

However, just about the time that S&TC was jumping the shark, SJP was reaching for the movie stars – and this was about the time that her acting charisma came crashing down.  She stepped into a never-ending spiral of bad roles in bad films – Failure to Launch, The Family Stone, Smart People, Sex and the City: The Movie, Spinning into Butter, Did You Hear About the Morgans?, Sex and the City 2 and New Year’s Eve.

I Don’t Know How She Does It is not as bad as the worst of that fetid bunch – Failure to Launch, The Morgans, New Year’s Eve and S&TC 2 are all worse films.  I Don’t Know is pretty damned wretched, though.

Also, the film has hijacked the Sex and the City tactic of having SJP narrate over the action, giving the film the unfortunate feel of what would have happened if Carrie Bradshaw got knocked up young and became a complete status-obsessed breeder corporate doormat.

Apparently, the main difference is that her designer clothes would have dried pancake batter on them.

I Don’t Know How She Does It is a film that fetishizes parenthood.  It is an upper-middle-classed fantasy where kids are always cute and well-behaved, businessmen are doting and sweet-tempered, money problems are discussed but never felt and stay-at-home moms are vain, self-centered bitches.

Kate Reddy (Parker) can bring home the bacon, fry it up in a pan, feed the baby, grease the car and powder her face at the same time.  She’s supermom – able to leap glass ceilings by day and obsess on being a doting mom by night.  (In fact, she spends more time obsessing about mothering than she actually spends on mothering).

Yet, despite the fact that men in her life are constantly enabling her – by taking care of the kids, promoting her business ideas to the right money people and not firing her when she blows off a huge business trip to Atlanta, so she can make a snowman with her daughter – Kate and her friends are constantly going on about how no man can ever understand or handle the stress and hardship of working motherhood.  Then she goes on a massive crying jag for missing her son’s first haircut.

In fact, it’s hard to understand why Greg Kinnear – playing her abnormally patient husband – doesn’t ask for a divorce.  After all, he also works full time and takes up the slack with the kids during Kate’s very regular business trips, and then has to constantly massage her brittle ego when she is home.

There are a lot of hard-working mothers who are not nearly as much of a flibbertigibbet (I’ve literally never used that word in my life, but that is the one word that perfectly describes Kate’s character).  They deserve a movie where they are taken seriously, not patronized.  Everyone on screen is jumping through hoops to tell us what an incredible person Kate is, but honestly, she seems like a complete disaster.  She takes every bump in the road that life throws at her and turns it into a mountain.

And, for the record, the only thing I can think of that is more unlikely than the idea of Sarah Jessica Parker bowling is the idea of Pierce Brosnan doing it.  So, lord help us, the creators of I Don’t Know…showed this as well.  Because, they may be high pressured execs, but honestly, they want to be normal people.  I don’t buy it for a second.