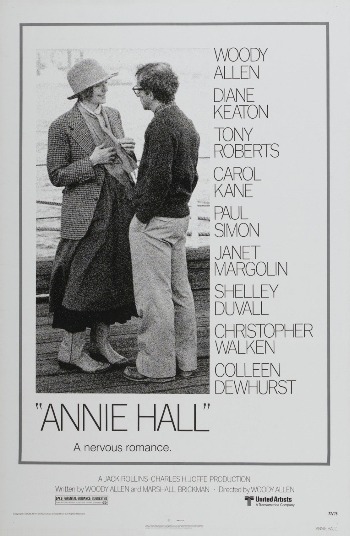 Shockingly enough, just this past year, Woody Allen had the highest grossing film in his career with Midnight in Paris.  That was a fine movie and deserving of its accolades, however it really is a minor jewel in the prolific director’s body of work.  So, perhaps it is fitting that on the heels of that renaissance of Woody love, arguably two of his finest films – certainly two of his most acclaimed – make their Blu-Ray bow.

In fact, one of them is indeed the epitome of Allen’s work – his finest moment.  Annie Hall won Allen his first and only Best Picture Oscar and it was completely and utterly deserved.  (Even though as a young teen in 1977 I thought the original Star Wars should have beaten it – but that was before I had ever seen Annie Hall, and probably before I could have appreciated it.)

Annie Hall was advertised at the time as “a nervous romance,” and that is exactly what it was.  An aging, neurotic, liberal, intellectual, balding New York Jewish stand-up comedian falls in and out and back in love with a beautiful, just-as-neurotic, small-town Midwestern shiksah wannabe nightclub singer.

The movie floats back and forth in time through their lives and their relationship, illustrating the highs and the lows of their love.  (And, sadly, just like real life, there are more lows than highs.)

The structure of the film (or lack thereof) was rather radical at the time (for example, this was 17 years before Quentin Tarantino used a similar time structure in Pulp Fiction.)  It would seem that it would be a mess, but it somehow snaps all into place.

More importantly, in a way that all too rarely occurs anymore in Allen’s films, Annie Hall was damned funny.  There are more classic jokes in the hour-and-a-half running time than just about any comedy of the seventies.  If you can’t find a classic line to steal from this movie, you just aren’t trying. 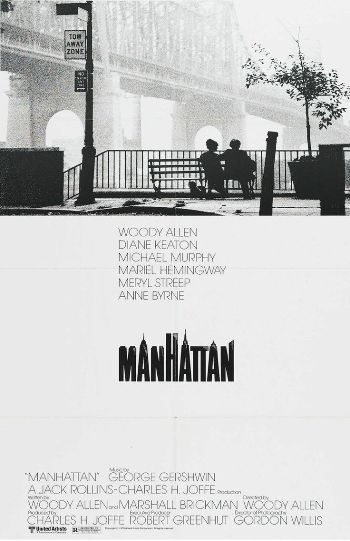 Manhattan, while a very good film, is not on the same level.  It’s certainly not even Allen’s second best film.  Hell, even Allen himself has apparently suggested that the film was a bit overrated. Hannah & Her Sisters and Crimes & Misdemeanors are definitely on a higher plane.  You could also make arguments for Love & Death, Mighty Aphrodite, Vicki Cristina Barcelona, Bullets over Broadway, Match Point and even Midnight in Paris being at a similar height of quality.  That is not meant as a slight on Manhattan, it’s just acknowledging the high level of craft that Allen has reached over a career that has spanned over four decades.

However, it does show a fascinating progression in Allen’s writing, therefore it is a hugely important step in his career.  Annie Hall was sort of the bridge between Allen the comedian and Allen the auteur.  While Manhattan was his next comedy after Annie Hall (he also made Interiors between them, but that was very much meant to be a desolate drama) the difference in joke content is stark.  Manhattan is a comedy, but it is never laugh out loud funny like Annie Hall.  The humor, what is there, is more character-driven.  The jokes always play second fiddle to the situations.  This is a style which Allen has mostly settled on in the years since then.  He even mocked it slightly a few years later in a highly autobiographical scene in Stardust Memories when Allen was playing a director at a film festival where everyone would point out that they preferred his “early, funny films.”

Manhattan is a very good film, just not as classic as its reputation suggests.  Still, with its striking black and white cinematography, New York City has never looked more magical on film.  The opening montage alone – in which many of the city’s sights are shown to the backing of Gershwin’s “Rhapsody in Blue” – is a better sales job for the beauty of the city than anything any Chamber of Commerce could come up with.

The story itself is more by-the-books for Allen.  He plays an aging comedy writer (again) who falls for the woman that his best friend is having an affair with.  At the same time, he is dating a high school student and dreading his now-lesbian ex-wife’s tell-all book about their lives.

Of course, these roles are played by Keaton, Michael Murphy and the mostly unknown at the time Meryl Streep and Mariel Hemingway, so it goes without saying the acting is superb.  And the dialogue is certainly interesting, but the film does not quite captivate like Annie did.

Speaking of these actors, I noticed something odd.  In the end credits to each movie, an actor who would later become a relatively big star’s name was misspelled.  In Annie Hall, Christopher Walken’s name is spelled “Christopher Wlaken” and in Manhattan Mark Linn Baker apparently gets a sex change operation to become “Mary Linn Baker.”  That’s so weird, you don’t expect to see something like that in a movie’s credits, and doubly so for such artistic and well-respected titles as these.

However, those are two tiny glitches in films which run the gamut from very good to nearly perfect.  Annie Hall and Manhattan are necessary viewing for anyone with even a passing interest in Woody Allen, New York or fine film making.