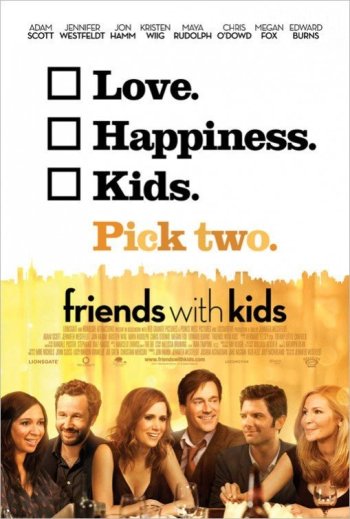 It’s not easy to find a romantic comedy that is both romantic and comic in today’s Hollywood, so Friends with Kids is a nice surprise.  Smart, funny and occasionally surprisingly acid-tongued, the movie looks at mid-thirties baby fever and makes it feel universal.

While I don’t always buy into the film’s periodic “all you need are children” dynamic, for the most part Friends with Kids is a pointed and intelligent romantic comedy – which is a rarity these days.

Starring, written by and directed by Jennifer Westfeldt – who had co-written and starred in the charming bi-sexual rom-com Kissing Jessica Stein back in 2001, the movie is a wonderful dissection of relationships and sexual mores in modern New York.

Like most of the greatest fiction, the story sprung from real life.  Westfeldt and her long-time boyfriend Jon Hamm of Mad Men had noticed over the years that as their good friends got married and had kids, they would slowly fade out of their lives.  And on the rare occasions that they did see them, they were not close to the same care-free people they had known.

It all came down to kids, they realized.  Children were such a huge commitment that they inevitably changed people in all ways.  (Though Westfeldt and Hamm have been together for about 15 years, they are not parents.)

Westfeldt decided this could make for an interesting script.  Several years later, it appears as Friends with Kids.  It is the first film Westfeldt directed – a decision that she insists was not so much out of ambition as it was out of necessity.  Jake Kasdan was supposed to direct, but he could not work his schedule out to coincide with the cast.  Therefore, he agreed to help her take the reins.

She does a nice job for her first time.  It doesn’t hurt that she is working with an extremely talented group of people – most of whom are friends.

Westfeldt plays Julie, a single woman in her mid-30s who wants a baby but is not really feeling the attachment to any guy.  She and her long-time platonic friend Jason decide that perhaps they could have a child together as just friends – sharing the responsibility and the challenge but not making it romantic.  And now they both have the baby out of the way, perhaps they can look for true love.

This is sacrilege to their married friends (a mini-reunion of the cast of last summer’s hit comedy Bridesmaids, featuring Hamm, Kristen Wiig, Maya Rudolph and Chris O’Dowd.)  However, on the outside it seems that it is working.  They have an adorable kid.  Both meet terrific new people – he falls for a young dancer surprisingly well-played by former Transformers babe Megan Fox, while she falls for a handsome single dad, played by Edward Burns.

But can you share such and intimate bond and not have it become intimate?

Well, you can in real life, but perhaps not in reel life.  This is a romantic comedy after all – and apparently even an abnormally good romantic comedy had to have a scene of someone driving frantically across New York to declare their true love in time.  (And, by the way, this film may have the single least romantic declaration of true love in any movie.)

Therefore, the final scenes feel a bit formula when they go through the “will they or won’t they?” paces.

However, the characters are so likable and recognizable and the writing is so uniformly strong that you can mostly forgive the slight stumble into formula (no pun intended) towards the end.