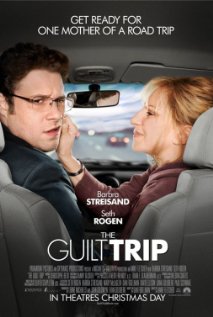 When Hollywood is fishing around for potential film pairings, I can’t imagine that Seth Rogen and Barbra Streisand were at the top of the pile.  Stoner slacker-chic comic actor meets aging legendary pop music diva?

But, you know what?  The Gullt Trip shows that they can work together.

In this mother and son reunion road trip, Rogen plays Andy, a California-based inventor making his last-ditch attempt to save his career by selling a natural cleaning product he has created with the awkward name “Scieoclean.”  Andy’s product actually works, but his salesmanship is lacking, the details are confusing and most big company reps have tuned him out long before he has a chance to prove Scieoclean’s worth.

Setting up for a cross-country sales trip, Andy crashes in New York with his mother Joyce (Streisand), an overbearing-but-ultimately loving yenta.  Joyce has not dated since Andy was eight, and when she opens up to him with a surprisingly frank story about the love who got away before she married his father, Andy Googles the guy and finds out that he apparently lives in San Francisco.  Since his trip would eventually lead him to Las Vegas – a fairly reasonable commute to the city by the bay – he asks his mother to accompany him on the road.  He does not tell her about the guy, preferring to break it to her right before they reach San Fran.

Road trip hijinx ensues, leading to fights and an eventual deeper understanding of each other.

While Streisand at 70-years old is a bit old to be 30-year-old Rogen’s mother – in fact she could be his grandmother – she does connect with him in a Jewish-motherly way.  Before someone cries ageism and suggests he may have been a late-in-life baby, the script specifies that she had him in her early 20s.  I’m not begrudging Streisand the right to play a younger woman (she does look younger than her age), or for that matter for Rogen to play an older guy.  I’m just pointing out that felt a little weird throughout.

However, if Streisand is a tiny bit too old for the role, that doesn’t change the fact that she almost single-handedly makes The Guilt Trip worth seeing.  Her character may be a bit of a Jewish mother cliché, but let’s face it, if you need someone to play a Jewish mother cliché, you can’t do much better than Barbra Streisand.  (She is, after all, our leader, as Fran Drescher often joked.)  Even if she is just playing a variation of the same role that she played in Meet the Fockers and Little Fockers (and she was one of the only reasons to see either of those horrible films, too), Streisand nails it.  In fact, if anything her Joyce is too loving, too sympathetic.  Her “nags” of Andy are often completely reasonable motherly concerns and Andy’s periodic sullenness toward her reflects more on Andy than it does on Joyce.

It is rather shocking that this is the first lead role that Streisand has taken since the 1996 romantic comedy The Mirror Has Two Faces.  I know her singing career keeps her busy, but it seems like a waste of talent that this talented actress, who has done serious drama as well as comedy, does not stretch out on film anymore.

The good news is that The Guilt Trip, while flawed, is head and shoulders better than the Focker movies were.

There is nothing the tiniest bit surprising about the tale (well, one late reveal seems to have taken all the people I saw the film with except for me by surprise) but the movie is charming and fun and often funny.

Rogen is also just fine in the straight man role, though obviously his character is much lower keyed than Streisand’s.  Still, he plays off of her with an old pro’s dedication and the two actors make what is essentially a middling script into a pretty good movie.