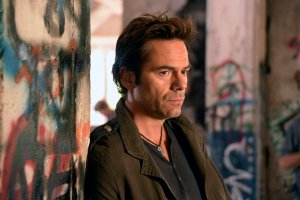 There haven’t been many sure things in this past network TV season, Revolution has been a good bet for NBC.  The post-apocalyptic thriller looks at a not-so-distant future Earth in which all technology has stopped working.  It was created by the powerful team of Eric Kripke (Supernatural), Jon Favreau (Iron Man) and J.J. Abrams (Star Trek).

Though the series is very much an ensemble piece, the main character is probably Miles, a jaded former Marine who is sort of drafted into a leadership role amongst the survivors.  Miles is played by Billy Burke, a long-time character actor who is no stranger to iconic roles: playing Kristen Stewart’s father in the Twilight movies, a homicidal lawyer on the TV show The Closer, a special agent with a personal history in Rizzoli & Isles and an addicted baddie on 24.

A few days before the first season finale of Revolution, Burke spoke with us and some other websites about the show and his career.

It looks like in the next episode that there’s a good chance they’re going to try to turn power on regardless of what’s going to happen. Is the issue of the lights being on and off going to continue to be what the show’s about? Or is it going to move next season more into being about the revolution and going against Monroe and his people?

To answer your question as honestly as I can, I have zero idea what’s going to happen after this episode. (laughs) I’ve not seen one line of one script for next season, so I don’t have a clue what we’re going to be going into. All I can say about the end of this season is that it all comes down to [the fact that] everything we’ve been fighting for comes into question.

Okay great. I guess my second question then you can’t answer either. .

What do you find the most challenging?

I’m not sure that I find anything particularly challenging. I’ve had more fun doing this than I’ve had doing anything in a number of years actually. It’s just been a joy every day. It’s hard work. I mean we work an average of 14, 15, 16 hour days. It’s a very physical show and I’m getting shit beat out of me all the time whether the character is or not. Me, the actor is going through a lot of physical stress. But I don’t find it particularly challenging at all. I like the way it works. We don’t know much more ahead of time what’s going to happen than the audience does. So it’s a good system for me. We kind of make it up as we go.

So far Randall [Colm Feore]’s been a bit of an enigma this season. What can you tell us? Will we be finding out anything about his intentions in the finale, what he wants?

The short answer is yes. (laughs) I can’t go into detail about it but yes, you’ll find out Randall’s MO in this last episode.

You’ve already lost two main characters this season. Should we be prepared for any deaths in the finale?

Well I don’t know that. The nature of the show is this, we’re all in precarious situations and all in the same precarious situation collectively together. The nature of the show is people are going to die in this scenario, the world being the way it is and the battles that we’re fighting. So I can’t speak to particular characters one or the other if they’re going to be around or not. As the show goes on and moves into the second season, it’s my guess – and I don’t know this for sure – that we’ll see new people and we might be saying goodbye to some others, yes.

What I’m looking forward to seeing in the finale – and I don’t know if it happens – is a confrontation, one on one between Miles and Monroe [David Lyons]. I know you can’t talk about it, but maybe you can say yes or no that there is one. Can you talk about theoretically if Miles would actually be able to kill Monroe if the opportunity presented itself? Or would their friendship still get in the way?

Well to answer the first part of your question it’s pretty safe to say that I don’t think that we’re going to end this season without some final showdown between those two characters. To answer the second part, we’ve seen that conflict go on for so long. The nature of these two guys is that, yes, they’re both fighting different sorts of pathos within themselves. Each one thinks that they’re doing the thing for the common good and for the overall right. That’s the struggle that we deal with. The brotherhood between them seems to be so strong that it’s kind of overcome a lot of those moments. But I don’t know how long that will continue.