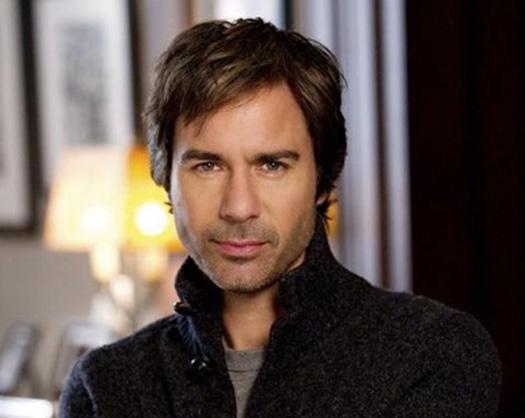 As TNT’s Perception returns for its second season, Eric McCormack’s “This-ain’t-no-Will” performance as brilliant-but-mentally-troubled Professor Daniel Pierce is taking on fascinating new layers.  Dr. Pierce is the world’s foremost expert in neurology and brain conditions and he has learned his specialty the hard way: he has been struggling with schizophrenia since he was in his 20s.

The first season closed in a dark place with Dr. Pierce fighting a losing battle with his demons, but one positive was that he re-met Caroline (Kelly Rowan), now a brilliant psychiatrist, but once just a gorgeous girl in a frat that Daniel had fixated on.  Though he never actually met her back then, Caroline became the basis for Nicole (also played by Rowan), Dr. Pierce’s long-standing hallucinatory friend, confidant and advisor.  However, can the real woman ever live up to decades of an idealized mental image?

In the meantime, Dr. Pierce’s problems are straining his relationship with his protégée Kate (Rachel Leigh Cook).  She is a former student-turned-FBI agent and Daniel often acts as an advisor on cases in which mental health issues come to the surface.  However, Dr. Pierce’s own problems are straining their friendship and working relationship – and it is not being helped by the return of Kate’s cheating ex (Scott Wolf) into her life.

Soon before the second season of Perception was set to premiere, McCormack gave us a call for this exclusive interview on his series and his career.

Congrats on the second season.  This year the show went from ten episodes to fourteen.  Was it nice to see that TNT was so strongly behind the show to let it stretch out more?

Well, of course I was delighted.  Particularly I liked… it’s weird, I thought we were showing all 14 in a row.  Turns out we’re showing ten and then they are holding four back for the winter.  But that’s good, too, because it seems to indicate that there is a reason to keep people interested until the next summer.  I thought it was a real vote of confidence.

The first couple of episodes look at Daniel’s relationship with Caroline, who is of course the real-life inspiration for his hallucination of Nicole.  Do you think that there would ever be a chance that the real woman could live up to the one in his head?

Well, it sounds like you hit the nail on the head.  That’s the fun of that idea, which I didn’t even see coming.  When we finished the [first] season, I didn’t know that that was [show creator] Ken [Biller] was intending.  I don’t even know if he did.  That idea of: If you literally could have your fantasy woman or your fantasy woman made flesh in the room, which would you choose?  Of course you’d want the real one, but the real one doesn’t go away.  The real one is a real person that doesn’t actually bend to all of your whims, because she is not actually in your brain.  I think that’s the fun, particularly of the second episode.  Him realizing that there was tremendous comfort in her as a hallucination.  But it still gave Kelly Rowan a lot to do.  Those were fun scenes to play.

In the season premiere, Daniel notes that he is so happy he’s no longer even cynical.  Can Daniel survive long without his cynicism?

Probably about fifteen minutes.  (laughs)  Yeah.  As he says in the one scene: “I’m happy, which is really annoying.”  It’s not just something he hides behind, I think it is a world view that comes out of being a scientist.  Being a realist.  Being an academic.  He can’t just put on rose-colored glasses.  It’s false to him.  Ultimately, what we’ll discover with it [is] medication is for him.  That’s a real line that we walk.  He absolutely knows that medication is crucial for most everyone with his disorder, but in his case, it is a false front.  He needs to work through it without them.

Several of the episodes looked at the original hopes and dreams of Daniel when he was young, before having his mental issues.  Where do you think he would be had none of those happened?  Do you think he’d be more content?

More content in the long run if he hadn’t [had the condition]?  The interesting thing is that we did in that episode, which was called “Kilimanjaro” last year, we saw me as a young man.  We so loved the actor that played me, Shane Coffey, that the writers are writing more for him, in terms of flashbacks.  There is one particular episode that we just shot where I really look at myself again in a different perspective in flashbacks.  JoBeth Williams comes in to the series for an episode and plays my mother.  We see her and him together.  I think it’s actually really important when you show an audience a character like this that is so specific.  He is a professor and he has this disorder.  “Who was he and how did he get there?” is a question that people constantly ask.  We did allude to the fact that there was a time before his mental break that he was ballsy as hell.  He might have been a rock star.  He might have climbed mountains.  I think that is still in there, that part of him, but the fears and the paranoia that actually come with his disorder will always overcome that.