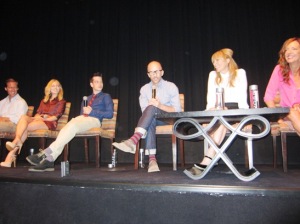 Summer vacation is always a time of great growth and change. Perhaps this is most true for Jim Rash and Nat Faxon, the writers and directors of the surprisingly funny and soulful new ensemble coming-of-age piece The Way Way Back. Rash and Faxon are probably best known as comic TV actors: Rash plays the crazy dean on the NBC series Community and Faxon starred in last year’s short-lived FOX series Ben & Kate.

However the two have long comic backgrounds and have also been writing together for ten years, even picking up a Best Adapted Screenplay Oscar in 2011 for co-writing The Descendents with Alexander Payne. They actually originally wrote The Way Way Back ten years ago. The script quickly became a hot Hollywood property and was quickly placed in production. But then, as so often happens in Hollywood, the business intruded, things changed and the script was placed in turnaround. However, it was respected and soon joined the infamous Hollywood “Black List”: a grouping of the ten best screenplays which were not being made. In a nice piece of symmetry, the script’s inclusion on the Black List opened up the opportunity for Rash and Faxon to work with Payne and George Clooney on The Defendants and that film’s success (and their Oscar co-win) gave Rash and Faxon the Hollywood pull to not only get their script back into production, but also to get the opportunity to direct the film together.

They quickly signed up a grouping of friends and actors they respected to tell their story of a young boy spending the summer in a Massachusetts beach town with his mother and her jerky new boyfriend, but who discovers himself when he gets a summer job at a nearby water park. Steve Carell played against type as the boyfriend (the film was also shot in the area of Massachusetts that Carell summers with his family), as does Sam Rockwell, who plays the motor-mouthed nice guy who runs the park. Toni Collette (The United States of Tara) plays his mother and Allison Janney, Amanda Peet and Rob Corddry are the vacation neighbors, while the water park is populated by lovable misfits played by the likes of Maya Rudolph, Rash and Faxon. The kid is played by the relatively unknown Liam James of The Killing and the cute girl next door is AnnaSophia Robb of The Carrie Diaries.

A week before the movie’s debut, film stars Sam Rockwell, Toni Collette, AnnaSophia Robb, Allison Janney, Liam James and writers/directors Jim Rash and Nat Faxon had a press conference at the Crosby Street Hotel in SoHo. We were there in the front row to ask some questions and get you all the answers.

Jim and Nat, can you talk about the cast? Did you have any of these people in mind? Was there an auditioning process?

Nat Faxon: Yeah. A lot of these were our third or fourth choices. (Everyone laughs.)

Jim Rash: Some up here were forced on us…

Nat Faxon: Because of the studio we’re working for. No.

Jim Rash: Yeah, it was a dream cast, certainly. I think Allison, [The character of Betty] we wrote with her in mind. (Allison laughs.) Not her as a person, but just something that we knew that she could just [pull off].

Nat Faxon: Sort of a drunken kind of friend of ours…

Jim Rash: Yeah, yeah. Like a tornado of too much.

Nat Faxon: … that really could embody no filter.

Jim Rash: But, honestly, we did. Just thinking about these people. We were just looking for actors that we admired both as wonderful talent and also good people. With Trent, we wanted to go against type. Steve came to mind because of this innate ability he has that elevated Trent. Past just being something where you’re demonizing him, rather making him this true, real human, tragic male character. Steve jumped into that. Against type was certainly paramount. We think in our heads, Sam came to mind. We were like, who just understands what Bill Murray was to us in Meatballs? Sam said it on phone the before we had said anything. So we knew right away that we were all on the same page.

Nat Faxon: I think all of these incredible people who surrounded us understand and appreciate ensemble-type films. Jim and I come from The Groundlings and a lot of the stuff we do are performing with other people. Writing shows with other people. In that collaborative spirit. I think this movie is the sum of its parts. It takes a certain type of person to understand that and jump in. We’re so incredibly fortunate that all of these people came on this ride with us.

What do you think about the archetype of playtime as the redemptive factor in Duncan’s coming of age? He actually breaks away from miserable home life through play, the carnival…

Jim Rash: Yes. There are a couple of things that go into this. For me, in the design of what Liam’s character is going through, you have two male roles in his life; you have Trent, who… his idea is to cast him out. In other words, to fend for yourself and go forth and make something of yourself. Get out. Don’t be a three. Then you have Sam’s character, Owen, saying the same message but in a much more nurturing way. Come into the fold, put on the shirt, you’re official. In other words, join this playground, which is pretty much how Owen operates in his mind. He is at his best for three months out of the year, in the sense that he’s King while this park is open. It’s an at-play opportunity, in the sense that it becomes Duncan’s Oz. So because of this place that nurtures all types of people, in order for them to celebrate who they are, which I guess is playful and fun, it is about pushing him to go dance and control this thing. But he is saying it in such a way that he’s officially nurturing that. Making him part of the wonderful experience of these people who just come to this place when the beach is over here. This is very unique, so I guess in that way Owen is offering something completely different, in the way of a celebration.

Nat Faxon: I think we were also trying to achieve it in a cinematic way. We had long conversations with our DP, John Bailey, about how we could make the house feel suffocating and isolating and closed-in, whether that be shooting from a lower angle so you could see the ceiling and feel that claustrophobia that Duncan is feeling at the time. Contrast that visually with what we wanted for the water park: as Jim said, to feel like Oz, that openness. Shooting it with a Steadicam to create movement and excitement. Doing a ton of walk-and-talk moments with Sam. All were part of trying to make it feel colorful and bright and open and fun and playful.

I wanted to ask Liam and Sam [about] the relationship at the heart of the movie – how you guys worked together and if you were pulling pranks on each other the way Duncan was pranked-upon in the movie?

Liam James: We had a lot of fun together. As soon as I arrived at where we were going to be shooting, a couple of days before we started, Sam and Nat and Jim we all sat down together. I was doing this new thing, something I’d never done before, this huge part. They really made me feel comfortable that I could do anything I needed to do for the movie. They just sat me down. The thing that made me the most comfortable was how funny they were, all the jokes they were telling. Wherever I was around them between scenes, I would go to them and just listen and laugh and have a great time. Personally, between me and Sam, one thing that he showed me was, he’s really into boxing and he was showing me some moves. (chuckles) That’s one way we kept loose in between scenes.

Jim Rash: We made them fight. That’s how we got them.

Nat Faxon: Some cage-fighting between them. He survived.

Sam Rockwell: I think it was pretty immediate chemistry with me and Liam. We had an immediate understanding of the relationship. It was just so easy, we were just sort of on the same page, all of us. It wasn’t a lot of dialogue. We read it a couple of times. We all knew what it needed to be. It was instinctive, I felt. These guys would guide me, but it was very free-feeling on this movie.

For the actresses, I wanted to know how you got into the head and the heart of the character, and whether there was anything in your personal lives or youths that you drew on for these particular women…?

Toni Collette: For me, I start with this wonderful material. It’s always in the script. When it’s so clear and so rich and so complex and enjoyable, I’m not one of those people who draws on previous experiences or anything that blatant. Everyone was so receptive to the material, so open, and it was such a wonderful atmosphere to work within. That did create a really open kind of vibe. It allowed something really relaxed and natural and special to evolve.

Allison Janney: Parties. I can relate to Betty’s fun side because. These gentlemen have seen how I throw down at a party. (Jim and Nat laugh.) I like to dance. I like to have a great time. So that part I was excited about, when I first read Betty. But I was also very hooked by the fact that she’s in a lot of pain, self-medicating with alcohol and chatter to cover up what’s underneath. That’s what fascinated me about her. She wasn’t just a one-dimensional, silly character. She’s actually very complicated. It was very exhausting to play her and yet incredibly rewarding. I responded to their writing. It’s brilliant, she’s a brilliant character. But a little Betty goes a long way.

AnnaSophia Robb: I definitely agree with Toni, it was all sort of the page. I remember my first meeting with Matt and Jim, how we clicked. The chemistry felt so natural and comfortable. Being on set and being in that environment that the characters are in just really got me into the headspace. Being able to spend time with Liam and getting to know each other for the first time. I felt sort of adopted by Allison in a way. Being able to hang out on set was a real privilege for me. I drew everything from the script. It’s nice to see your girl-next-door character be multi-faceted and not just one-dimensional. She’s going through hard things herself.