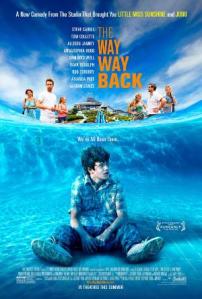 The Way Way Back

The Way, Way Back

The Way, Way Back is nothing you haven’t seen before: a coming-of-age drama set at a beach resort during summer vacation.

However, it is rare that these somewhat overdone plot points are done as smartly and confidently as done here by co-writers/co-directors Jim Rash and Nat Faxon, who shared the Best Adapted Screenplay Oscar for their 2011 Alexander Payne collaboration The Descendants.  (Rash has also become a cult favorite as the wacky dean on the NBC sitcom Community.)

While The Way, Way Back is not quite as serious business as The Descendants, it is strong proof that the earlier film was not a fluke: these two have a fascinating narrative voice and will probably make many more intriguing movies.

Actually, the script for The Way, Way Back has been out there for over ten years, with production starting and stopping on filming.  It went into turnaround and eventually became a legendary unproduced screenplay, a part of the infamous Hollywood “Black List” of the ten best unmade scripts.

In the press conference for the film, which I attended, Rash explained that The Way, Way Back was loosely based on an incident from his childhood.  At the time, his step-father asked him how he would rate himself from one to ten, and when young Rash low-balled it with a six, the stepdad insisted that he was no better than a three.

That little germ of an idea (recreated in the opening scene here, though the speech is given by the mom’s new boyfriend, not a stepdad) is turned into a smart, compassionate and funny look at the foibles of growing up.  It is equally inspired by Summer of ’42 and Meatballs, and if that seems like an odd mix, somehow it works.

The Way, Way Back (the title refers to the backwards-looking back seat of an old station wagon) is oddly timeless, sometimes it seems like it is taking place in the 80s, sometimes in the current day.

Click here to read the rest of this review!