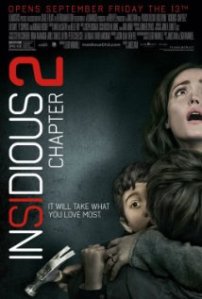 The original Insidious film in 2011 was a low-budget sleeper hit.  So it is not all that surprising that a couple of years later the second film appears, apparently with an eye on becoming a long running horror franchise.  Particularly when you consider that the writer (Leigh Wannell) and director (James Wan) of Insidious also created the long-running Saw franchise, which spawned seven films between 2004 and 2010.

What is a pleasant surprise is how much thought was put into the continuation of this tale, unlike Saw, which just used the same tricks ratcheted up for violent effect over and over in the sequels.  Perhaps this is because Wan and Wannell returned for this continuation (they jumped ship after the first Saw movie).  Perhaps it is because Wan has become a first-class horror director in the years since his Saw breakthrough.  Perhaps it was just that they tried to give nuance to the original story, rather than cynically repeating the first film.

Whatever the reason, Insidious: Chapter 2 feels like a very fitting continuation of the saga.

In fact, it is very specifically that: a continuation.  Insidious: Chapter 2 picks up the story moments after the first film’s action.  It continues the story and in imaginative ways it periodically doubles back on the action to see scenes we experienced in the first movie shown from a different perspective.

Therefore, while it is not necessary to have seen the first Insidious to enjoy the second, it is certainly helpful.

And while Insidious: Chapter 2 loses many of the fresh chills of its predecessor, it does come up with some lively ways to continue the story.

Josh (Patrick Wilson) and Renai (Rose Byrne) have literally just finished fighting off the demons in their home as Insidious: Chapter 2 begins.  However, the first film ended on the reveal that Josh had apparently been possessed by the main demon.

Click here to read the rest of this review!