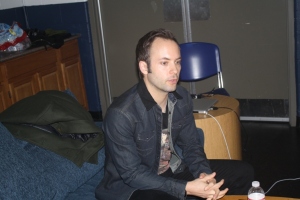 Dallas Smith backstage at the Santander Center in Reading preparing for a show with Florida Georgia Line and Colt Ford on November 17, 2013. Photo copyright 2013 Sami Speiss.

Dallas Smith is a veteran of the stage, but he is a newcomer to the US country scene. He’s had a highly successful career as front man for the Canadian rock band Default, whose first record The Fallout achieved platinum album certification and spawned the smash hit single “Wasting My Time.” That band was together from 1999 until the last year, when the members split amicably to pursue different projects.

For Smith, his project is country. He recently released his US debut single “Tippin Point,” written by Florida Georgia Line’s Brian Kelley and Tyler Hubbard, along with Jaren Johnston. There is a full length album on it’s way. He already has a critically acclaimed country album in his native Canada, which garnered him five CCMA award nominations in 2013. Smith toured with Bob Seger in Canada this year and is currently opening for Florida Georgia Line’s “Here’s to the Good Times” tour.

Pretty impressive for this country rookie. It appears his past success as a post-grunge rocker was not a fluke. This chameleon of an artist may well be on his way to the same level of success in his present genre.

I spoke with Dallas before the Florida Georgia Line show in ReadingPA and learned a lot more about this personable Canadian singer. It’s a pleasant surprise how remarkably calm and soft spoken he is, considering he performs on stage in front of thousands of people.

I was intrigued to see how his performance would go. Well, I found out a few hours after we met. Not having a full album yet and being the first of the three shows for the evening, he had a short set, which was the only disappointment. Smith has great vocals, high energy and got the audience going.

He ended his set with his single “Tippin Point,” which is very FGL-esque since they did write it. Smith had the audience singing along and ready for the rest of the party to come. Luckily Smith reappeared at the end of Colt Ford’s set to sing along to “Dirt Road Anthem.” That was a nice surprise and I do believe he stole that show! It was great. I look forward to hearing more.

Here’s what Dallas had to say:

For your fans of Default I need to ask, any chance of a reunion?

We did a charity show earlier this year in Alberta, but no shows on the horizon. I’m pretty busy with this and to be honest all the other guys are quite busy doing what they’re doing as well.

So they’re all doing different projects? I wondered if it was just you, if you were the catalyst or who the catalyst may have been.

We all just came to an agreement that we’d been doing that for a long time, everybody had their aspirations to go do different things. And yeah once that record cycle was finished it was not a goodbye but it was a let’s just go and do other things and see where they take us. We can address things as we go. Never say never but from this moment here I’m pretty busy.

Oh, yeah. Yeah. Everybody’s good. To be honest, we spent so much time together that I think breaking at that point saved a lot of friendships. You get stuck with the guys for that long things become very tense. It’s the perfect time to call it a day and move on.

Is anyone in the band doing what you’re doing with country?

No, none of the others guys were into the country music when I was playing it on the bus. Danny [Craig], the drummer for Default, he’s producing lots of stuff now. The other guys are off doing their own things as well so.

So how do you go from post-grunge front man to country music? How does that evolution occur?

It was a slow one. The household I grew up in was a lot of classic rock and 80’s female country. A lot of Reba [McEntire] and the Judds. There was Garth [Brooks] kicking around and Brooks & Dunn and Alan Jackson, but my mom was mainly playing that. My dad wasn’t into country. When I was in my late teens/early twenties, being in a rock band was the cool thing to do obviously. There was not a huge country market out in Vancouver because we were so close to the Seattle scene. That was a major influence on my friends. We did the rock band thing for over 12 years. It was around the time that artists like Keith Urban and Rascal Flatts came in. It was a lot more guitar driven. It caught my ear as the perfect storm between the great voice, the great country vocals, storytelling lyrics and that rock influence in country. That’s when I started going: Hey this is the perfect storm of what I grew up with. And yeah I started singing along with Keith Urban when I was on the back of the bus.

It became more mainstream too, so the market was there for you I guess?

Now that you’re touring solo, is there a big difference for you working with a band versus working solo on stage?

Well we treat this project as a band as well. I guess with a rock band you can be more anonymous. With this you have to be a little more involved on stage. You have to be more interactive as a singer. That makes a difference.

Was that hard to segue into?

Yeah, it was something I had to grow into. I feel like every time I get on stage in these situations I’m learning. Watching the FGL [Florida Georgia Line] guys and Colt and what they do. It’s a lot different than with the rock bands I toured with.

How did your musical career start?

I have a bit of a strange story, lots of music around the house. My mom was in a choir. My dad played guitar and sang around the house. I guess when I hit five or six years old, my mom said I just shut up and I got really shy about singing. Nobody heard me sing until I was about 20 or 21. I used to sing in the car. I’d sing in the shower. I’d sing along to stuff. But I never sang in front of anybody. I used to watch the Default guys play in a different band. I’d go hang out with them on Friday nights and go jam in the garage and stuff like that. It finally came to the point where I wanted to get over the fear of singing in front of people, so I sang a couple songs with the guys on Friday nights. Within a year of that we had a US record deal. Then a year and a half after that we sold a million records in the US. So I went from not singing in front of anybody to having a US platinum record in two and a half years. It was kind of a different story than most. It happened fast. I was thrown to the dogs. I  thrive in this situation. As a solo act I come out and get thrown on the FGL tour. Sink or swim, got to find a way.