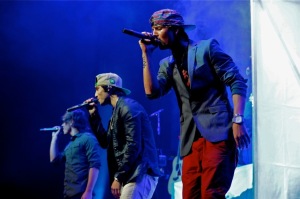 Emblem3 Hitting the Road with the #BandLife Tour

If I had to describe Emblem3 in one sentence, I would say: Emblem3 is a group of three socially responsible guys who are stealing the hearts of girls around the world, and oh yeah…  they can sing too!

This statement perfectly describes the musical trio, known as E3 to millions of adoring fans.  The group consists of brothers Keaton and Wesley Stromberg and their friend Drew Chadwick.  Until stepping on to the stage of X Factor in late 2012, they were just three California boys who loved making music together.  Since that day, life has been a whirlwind.

Immediately following the show, E3 signed on the dotted line with music mogul Simon Cowell’s Syco Records and Columbia Music.  Several months later, the guys released their first hit single “Chloe (You’re the One I Want),” which quickly became an anthem to millions of “regular” girls everywhere.  Their follow-up single “3000 Miles” was reminiscent to the great rock ballads of the past, and was also a hit with their fans.  Their album Nothing to Lose was released in July 2013.  Using a mixture of sounds – including pop, rock and even a little rap and reggae – the boys of Emblem3 have a great sound and will continue to mature as musicians and writers for years to come.

Having just returned home from opening for the US leg of Selena Gomez’s Dance Star Tour, there will be little time to relax for these three extremely busy guys.  E3 are embarking on their first headlining tour in just a few weeks.  Emblem3’s #BandLife Tour 2014 will be stopping in 24 U.S. cities, as well as two stops in Canada, the Atlantis resort in the Bahamas (jealous!) and in Lisbon, Spain.  (See full tour list below.)

We have connected with the boys in Emblem3 several times before as they were passing through Philly.  Just yesterday I checked in with Drew and Wes by phone (though Drew did most of the talking while Wes drove) as they were enjoying a day in the brilliant California sunshine before heading out on the road again for #BandLife.  Beyond the fact that they really are talented, these guys also have lots of other important things to say.

Hey guys!  This is Debbie from PopEntertainment.com.  How are you?

Drew Chadwick: What’s going on, Debbie?  We’re pretty good.  Me and Wes here just kicking it in his car.  We are driving down Highway 99 on our way to the SequoiaNational Park.  We’re going to do some soul searching out in the great Mother Nature.

Oh nice!  I can’t even tell you how jealous I am, as I’m sitting her in Philly with 10 inches of snow outside.

Drew Chadwick: Oh girl!  You need to get your butt over here to the west coast!  It’s really nice.  Honestly, it’s like heaven on earth!

Things have been crazy for you guys since we last sat down, before your CD signing at the Best Buy in Fairless Hills, Pennsylvania.  Things certainly don’t seem to be slowing down, either.

Drew Chadwick: Oh wow!  That was the last time we saw you, Debbie?  Nice!  Well I’m glad that we are connecting again.

How excited are you guys to be heading out on your first headlining tour in a few weeks?

Drew Chadwick: If you were here right now, you could see on both of our faces that we’re freaking happy.  We are so excited.  We’re going to go hang out with and see our amazing fans.  I need to find a way to describe how much we appreciate and love them and how excited we are to hang out with them.  They’re just honestly really f-ing cool.  I don’t want to say the f-word because you’re a girl and it’s not cool, and I don’t like to say curse words around girls.  So I’ll just say they are really f-ing cool.

We also get to bring our best buddies that we grew up with out on the road on our tour bus.  We’re going to film everything and remember the first tour for the rest of our lives.  Then when we’re old and gray, we’ll have footage of our glory days.

Your song “3000 Miles” perfectly depicts the feeling of being on the road so much.  Since you guys will be touring for several months to come, what will you do to keep grounded and to try to avoid feeling homesick?

Drew Chadwick: Since we’re bringing our best friends, we’re basically going to party the whole time.  We also have our gym trainer coming out on the road too.  He’s also a life coach, so he’s going to get us up early.  We’ll have to do cardio every morning.  He’s going to weigh us every day and have us on a really good, healthy, organic diet.  We’ll just be hanging out with our best friends, going from city to city and meeting up with our fans.  Probably partying after shows with fans.  I have to be honest.  We want to hang out with them.  We’re like best friends with our fans and we love them.  We just want to hang out with them.

Wesley Stromberg: The whole thing is going to be great.  It’ll be like a big camping trip! (laughs)

One thought on “Emblem3 Hitting the Road with the #BandLife Tour”