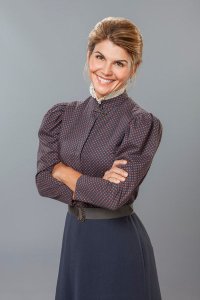 Lori Loughlin stars in the Hallmark Channel series “When Calls the Heart.”

It’s not easy to find nice, wholesome family friendly fare in such a cynical age.

That was why Lori Loughlin signed on the dotted line to be a part of the new Hallmark Channel series When Calls the Heart, based on the popular books by Janette Oke about a big-city school teacher taking a job in a small mining community in the Canadian west of the early 1900s.  That teacher, Elizabeth Thatcher (played by Erin Krakow) has to get used to the hard lifestyles of the frontier town.

Much of her introduction to the genteel ways of the old west is provided by Loughlin’s character of Abigail Stanton.  Abigail, like many of the other women of the town, was recently left a widow due to a mining collapse.  Now she must learn to survive and raise her children on her own.

The series is helmed by Michael Landon, Jr., which makes sense because it is rather reminiscent of his dad’s previous shows Little House on the Prairie and Bonanza. The show is also similar to the 70s hit The Waltons, so it is a sad coincidence that this interview took place on the same day as the death of the father from that series, Ralph Waite.

Loughlin has had a long and varied career, starting as a teen in the soap opera The Edge of Night.  Soon she was playing lead roles in several popular me-generation hits including Secret Admirer (with C. Thomas Howell and Kelly Preston), Back to the Beach (as the daughter of a grown up Annette Funicello and Frankie Avalon) and the motocross drama Rad.

Soon after that, Loughlin joined the cast of the hit TGIF sitcom Full House, with Bob Saget and John Stamos.  (Stamos recently started a buzz referring to Loughlin as the woman who got away in his life.)

In the time since Full House left the air, Loughlin has juggled acting and motherhood, appearing in such diverse series as Seinfeld, Spin City, The Drew Carey Show, Ghost Whisperer, 90210, Psych and The Larry Sanders Show.

We recently took part in a conference call with Loughlin and a few other media outlets to discuss her new series and her career.

I really would miss my washer and dryer.  Hah!  And my dishwasher.  (laughs)  We had to do a scene where we were washing the clothing.  Michael Landon, Jr. was directing that episode and he really had me scrubbing.  He’s like, “No, you have to scrub like they did years ago.”  My hands were raw by the end of the afternoon.  I’d miss just the simple things, like my washer and dryer.

Michael’s dad was obviously sort of synonymous with this type of family-friendly old west programming.  What is it like working with Michael Jr.?

Michael Landon, Jr. is an absolute dream to work with.  I can’t say enough nice things about the guy.  He’s extremely talented.  He’s very, very kind.  He’s a great director, great with actors.  Kind to the crew.  Very soft–spoken.  Loves to laugh.  Loves to be funny on set and have laughs during the day.  He’s fantastic.

I still remember first seeing you in a great old film comedy called Secret Admirer, which I was shocked to find while researching these questions that it is almost 30 years old.

Yeah.  It came out in 1985.  When you first got started in acting, did you ever imagine you’d still be working all these years later?

You know, I tend to live my life one day at a time.  But I really am very blessed and thankful that I’ve been able to work all these years.  I know that I am fortunate and I am among a small percentage.  For me, I feel like I wasn’t trained to do anything else.  I had nothing else to fall back on, so I had to make it work for myself.  Thankfully I’ve been able to.

Your character Abigail, is she going to have a bit of a Norma Rae type moment with the mine?  A rabble rouser as far as the safety of the women that are working in the mine?   And I’m wondering if your character too will find love this season.

I think towards the end of the season there is potential for a love interest for Abigail.  As far as the Norma Rae component, the going and working in the mine was one specific episode.  After that episode was over, once they achieved their goal, which was to save their homes, they took us out of the mine.  So I think it’s more about women coming together and community and helping each other.  For me, what I like about Abigail is she is now on her own.  She has to be independent.  She doesn’t have a man to rely on.  I really like that.  She does open her own business halfway through the season to take care of herself and support herself.  She definitely goes up against the character of Gowen, Martin Cummins’ character.  He’s the guy that runs the company that basically, for lack of a better word, owns the town.  He funds the town and the miners and pays the miners.  She definitely stands up to him when nobody else in the town will do that.  She’s afraid, but not enough where she won’t stand up for what she believes in.

Right.  Just a touch of Norma.

I’d think it’s been very moving for all of you to inhabit these characters who’ve endured so much.  Can you talk a little about what you’ve learned and how it’s affected you?

Well, I think what I’ve learned – and what I think I’ve always known in my own life – is that in life, we need other people.  It’s hard to go it alone.  It takes a village and you need a support system.  What I love about When Calls the Heart is even though it’s set in 1910, it feels contemporary to me in the sense that these women really need each other.  They rely on each other.  Together they forge ahead and they triumph.  I think that’s really indicative of society today.  It’s interesting because I see we can be so isolated nowadays because of the computer and the phone.  You see everyone looking down at their phone.  But I do think that we really do need each other.  I know for me, in my life with my friends, they’re very important to me.  When times get tough, of course I rely on my husband but I really do rely on my girlfriends.  That’s what I like about When Calls the Heart.  It’s these women in this community that are coming together to make a better life for themselves and for their kids.