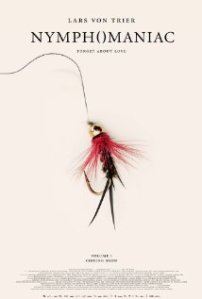 Leave it to controversial director Lars von Trier to make a film called Nymphomaniac which is not the least bit sensual and not even particularly sexual – though occasionally it is quite explicit.

One brief scene, in fact, shows what appears to be full-on penetration between Shia LaBeouf and actress Stacy Martin, playing the heroine as a younger woman.  (Word is the scene was done with body doubles and computer animation, though you see LaBeouf’s face during at least part of the shot.)  But, without sounding like a prude, is that particular explicitness – which normally would only appear in a pornographic film – an artistic choice or simply an attempt to shock the audience?

The truth is, with Lars von Trier, both considerations are pretty much interchangeable.

No one can deny, and no one should, that von Trier is a visionary as far as the look and feel of his films.  He has an artistic eye that is quite astonishing.  However, as has been noticed in his previous films likeDogville and Antichrist – he’s also a bit of a pretentious, self-indulgent blow hard who is often more interested in provoking his audiences than he is in telling them stories.

Nymphomaniac – Volume I is doing nothing if it is not trying to be provocative.

However, despite the promise of illicit sexual liaisons in the promotion of the film, the actual sexual scenes are relatively scarce and are purposefully filmed in an extremely non-erotic context and mood.

So what is there to Volume I?  Talking, mostly.  Some exceedingly clever but eventually exasperating side-tracks, well filmed but out of place, to the point that von Trier appears to be deliberately denying his audience the titillation that the title promises.

An example of von Trier’s mannered and slightly busy directing style has the heroine describing her loss of virginity.  At one point she mentions that the guy flipped her over like a sack of potatoes – cue a quick smash cut from her young ass to footage of a burlap bag full of potatoes being dropped and then back to the ass.  Artistic or precious?  You decide.

In other parts, the script takes great pains and goes into great detail to compare sexual relations to such mundane subjects as fly fishing, the music of Bach, leaves falling from trees and Fibonacci number sequences.   I’m not talking about a single reference to each, I’m talking about complete long conversations and periodic returns to the points.